Art of Its Own Kind: Bargarh Cluster 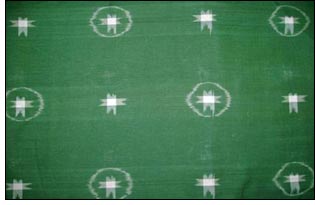 Handloom and handicrafts is one of the oldest and renowned cottage industries in India. Despite the blitz of modernization in industrial sector and the proliferation of power looms and composite textile mills in sovereign India, this industry continues to occupy a major place in the country's economy. In an inadequate capital and superfluous labour economy like India, this conventional cottage industry has been a major source of employment and livelihood to the people subsequent to agriculture. During the year 1988-89, it provided impressive employment to 7.8 million persons and indirect employment to 1.5 persons per every weaver in the loom engaged in production. Bargarh Handloom cluster is spread over the entire Block of Bargarh, Attabira, Bijepur and Sohella. The cluster has around 7000 looms as per the survey wherein 5000 are working in different villages over the area. The main products of the cluster are cotton sarees of tie and dye and small amount of dress materials, lungis and napkins etc. The annual production sums up to around Rs. 10 Crores. The products of this area are mostly marketed in Orissa and nationwide. The cluster is said to represent Orissa in Tie and Dye Cotton Sarees as no other clusters of other districts in Orissa produces such art.

The weaving is done by the traditional weavers' community popularly known as "Bhulia" which came in to existence during 17th century and later on, they spread to other proximate places. The cluster consists of substantial number of professional weavers (Non traditional) from Schedule Caste and Schedule Tribe (Kuli caste) weavers, which in total accounts for 60 %. Generally these weavers are less skilled and engaged in production of Napkin, Lungi, Sarees, Dhotis, etc.

The yarns were dyed with vegetable colours. The colours were extracted out of natural sources such as plants, trees, spices, etc. Here is the startling list of sources of some of the common colours:

The major changes in the cluster took place with the introduction of twisted cotton mercerized yarn and synthetic colours. The looms started widening their production spectrum. 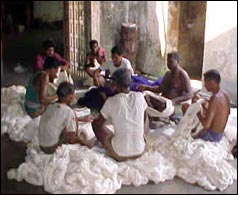 On asking about his views on the achievements of the cluster he enlists, So good so far, 88 SHGS formed and strengthened with regular hand holding support 1046 weavers covered, All the groups bank linked and 65 groups financed worth Rs.127.55 lakh by different banks, around 422 individual weavers credit linked worth Rs.96.29 lakhs by banks under SCC / ACC scheme, 4 consortiums formed and strengthened namely-

According to Mr. Nandy, "Additional Sales of Rs.98.45 lakhs generated through 21 exhibitions and BSMs. Sales generated worth Rs.4.52 crore through Boyanika from the Cluster." 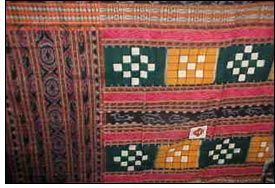 Activities in the cluster started taking impetus with the participation of Late Padmashree Dr. Krutartha Acharya and friends in the cluster area during 1942 and started their business with production on restricted numbers of looms. Later he converted his business in to a co-operative society named Sambalpuri Bastralaya, registered during the year 1954 under "Bihar and Orissa Co operative Societies Act" and established in Bargarh town. This is the first firm in the cluster, which took the leadership in weaving activities of cluster and stood as a milestone in its history.

Dissimilar to the Tie and Dye work of other states of India, the motif and designs of the cluster are infinite in number and every motif or design is categorized under a special caption. No design is let out without giving it a name. It shows the creative mind of the weavers of the region. The Ikat of Orissa has a wide range of flowers, fish, animals, God and Goddesses etc., as their motifs where as the Ikat of other states have geometrical and bold patterns as their motifs. The weavers of Orissa have the high skill to produce tie and dye fabrics with intricate and obscure designs. These weavers have innate techniques and with their creative mind they have diversified the designs and products to ensemble the current market demand.

The Implementing Agency, Orissa State Handloom Weavers Co-Operative Society Limited, is a 50 year old organization of Orissa, which is providing dynamic support to Primary Weavers Co-Operative Societies and master weavers in marketing their product. Design intervention, product diversification, and support in terms of improved inputs and international marketing is what the Agency is focusing upon.

Governments contribution to execute Bargarh IHCD (Intensive Handloom Cluster Development) programme is thus a manifestation of its wider outlook and a very momentous leadership role in western Orissa, hence escalating the activities of independent weavers of the area. In support of this Mr. Nandy stated, "The Support provided by the Government to the weavers is social security. Institution building, credit facility, capacity building and training, technological intervention, Engagement of designers, infrastructure equipments, market linkages, etc."