The conventional method of spinning core yarns using a ring spinning frame is reported to produce uneven looping of the core yarn which influences detrimentally the yarn quality. This method is also claimed to be inefficient since in wrapping the core filament with the loosened fibrous material an additional twist is imparted to the core yarn. These problems are not apparent when the OE spinning procedure is applied to core yarn spinning1. Three various methods of core yarn production in rotor spinning are there. There will be slight modifications in the rotor spinning unit for the core yarn production.

The rotor spinning is proving the economic source of producing the coarser number yarns, which satisfies the manufacturers profit need. It is the ever growing sector and the investment requirement will be lower than the other spinning systems. Though it is in the second place of yarn production technique, it has the domination over, all the spinning systems due to its remarkable advantages like higher production, low hairiness, more even yarn with good bulkiness. The strength of the rotor yarn is less when compared with ring spun yarn but the coefficient of variation in strength is very less2. Three methods are followed in this regard to produce the core yarn in rotor spinning machine. 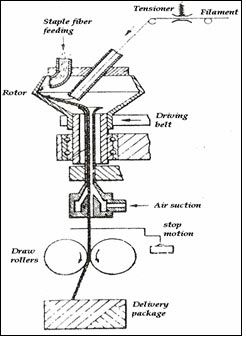 Fig.1 shows an arrangement for core yarn spinning. The illustration shows a rotor having apertures for generating an air flow, but suction devices external to the rotor may be used. In the base of the rotor is fitted a feed channel for feeding a filament in to the rotor. The feed channel is situated within the axis of rotation of the rotor and extends into the rotor chamber by a predetermined length. The diameter of the bore of the feed channel must be equal to the diameter of the core yarn or slightly larger than the feed filament; this is intended to prevent the intake of useless air through the feeding channel. Opposite the feed channel from the open side of the rotor chamber a stationary doffing tube is mounted co- axially with the axis of rotation. Above the doffing tube, a pair of delivery rollers and the yarn package drive are arranged to constitute the yarn winding-up mechanism. The wrapping yarn is spun in the known OE manner. Once spinning of the wrapping yarn is in progress, core filament is unwound from the supply bobbin and is sucked into the rotor chamber by the effect of the under pressure. The core filament is then caught up by the wrapping yarn and passes with it through the doffing tube. In the steady state condition, the wrapping of the filament yarn by the rotor spun yarn occurs within the doffing tube as shown in fig. every rotation of the peeling-off point produces one coil of the wrapping1. 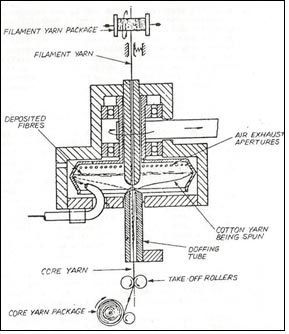 A simple method for the production of core spun yarn by the rotor spinning system is described by Nield and Ali. In this method, a feed tube positioned in the base of the rotor but in line with the axis of the doffing tube is used to feed the continuous filament core. The filament component must be fed with a suitable tension, in the absence of which it will fly to the collecting surface of the rotor instead of remaining taut along the axis of the rotor. To start spinning, the staple fiber yarn is pieced up in the usual manner. The doffing tube is then made to rotate in the direction opposite to that of the rotor, and the continuous filament core is next passed through the feed tube in to the rotor. It attaches itself to the staple fiber yarn being spun and is then pulled through the doffing tube by the staple fiber yarn. The rotating doffing tube acts as a false twister and pushes extra twist along the spun yarn to the peel-off point, while the rotation of the rotor wraps the spun yarn around the continuous filament core. Any type of material, including metallic wires of high torsional rigidities, can be used as cores to produce a core spun yarn. Thus the technique could be used for producing high insulation covered electrical flex2. Tests carried out at the Shirley Institute, using a continuous filament polyester core and short American cotton for the wrapping yarn; reveal severe limitations in the counts that could be spun. These limitations are the result of several technical problems, which would require a sizeable effort to solve. However, if these problems can be solved it is believed that the technique will produce a better core yarn using such materials as wire, rubber, and similar filament cores, as well as extruded synthetic filaments. 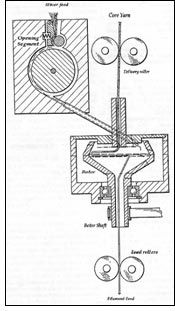 The higher twist requirement of rotor yarns and the difference in structure compared with ring spun yarns mean that a straight substitution of one for the other cannot be made when considering end use requirements. The rotor spinning system is particularly advantageous in the coarse and medium count range, which will have limitation in the only property, strength. This can be rectified by the core spinning. And also to produce the hollow yarns by dissolving the core from the rotor spun core yarns while using the dissolve material as core and the undisclosed material as sheath. Thus the core yarn production in rotor spinning gains importance in new spinning techniques.

The Authors are students of P.S.G College of Technology, Coimbatore.