Purple is a potent color traditionally associated with wealth, and richness. Black Friday is likely to be a purple day for the US retailers, as customers will be on a shopping spree.

Millions of Americans get out of their homes and go shopping on the three days immediately after Thanksgiving which is called as the Black Friday. This customarily marks the beginning of the Christmas shopping season. Retailers are gearing up for this most hyped shopping day of the year.

Does recession restrict the shopping force? 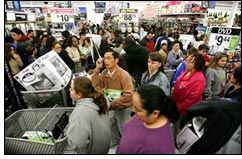 Despite the recession woes, excitement is there in the atmosphere. Customers are still cautious regarding their budgets, and will remain focused on the price points. Discounted products are likely to heat up the sales figures. An estimate states that 128 million people went shopping during the previous year, and are likely to increase by 134 million during the current year. A survey states that 36% of the total respondents expressed their intention for shopping for apparel and accessories. More than 50% of the people are in the hope of snagging a doorbuster deal. Doorbusters are products that will be available only in limited quantities on Black Friday. To avail this, the customer has to arrive at the store on the morning of Black Friday.

During 2009, online searches related to Black Friday shopping showed a strong surge by an increase of 20% over the previous year. Both online and in store shopping are the fastest rising search terms with blurring lines of variation between them. Shoppers interest in apparels seems high with 50% of the consumers searching for the best apparel deals. 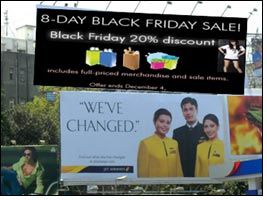 Shopping for black Friday in 2010 is anticipated to be better than ever. Sales are expected to pick up more by 16% this year. Retailers are making preparations even earlier than the season, offering much competitive prices, and key gifts with the purchases. They have a few tricks up their sleeves to bring excitement in the minds of the Black Friday shoppers. Much focus is on heavy advertisements for promoting their products. The excitement, the ads create about the day makes even more people up and out of the stores, bringing the event to a full circle. Immense sales are expected for items such as apparels, electronics and toys. Apparels stand second, only next to electronics in the preferred list of shopping items. 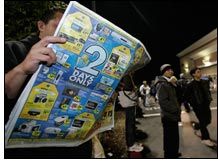 Retailers give doorbuster deals to lure the shoppers. Best Buy, Wal-Mart, and Sears roll down their prices even weeks before the season. Sear will be selling jeans for half its regular price. JC Penny plans for more discount than it did the previous year. Kmart is planning to open on Thanksgiving itself. A survey by the NPD Group during 2009 (The Anatomy of Black Friday 2009) states that 36% of the shoppers said that they went out looking for doorbusters while 35% of them actually bought doorbuster deals. This shows the power of doorbusters! Retailers also extend the time for keeping the shop open so that more customers can walk in for their special deals. Though retailers avoided stocking up heavily due to uncertain demand during recession, evidences emerge stating optimistic beliefs from the retailers side for more sales in 2010.

After living through the depressing period of meltdown, retailers are having high hopes on this holiday season with a positive expectation that sales will pick up. Potential strategies are positively expected to accelerate the retail business for the coming season.