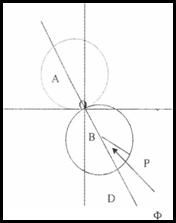 In the figure a three dimensional Cartesian representing the yarn axis lies along OZ (Perpendicular to the plane of the paper). The rotating vector OB advancing
generates the helix representing the strand axis at a constant rate along the two-fold yarn axis