Handloom Cluster Development: An Ideal Endeavor to Propel the Sector

Need for the Developmental Revolution

Government has been working hard for the ailed Handlooms sector since long. But in spite of its endless efforts and initiatives the sectors seems to decline anyway. There is the situation where artisans, village and cottage industries, micro enterprises are facing the following problems: 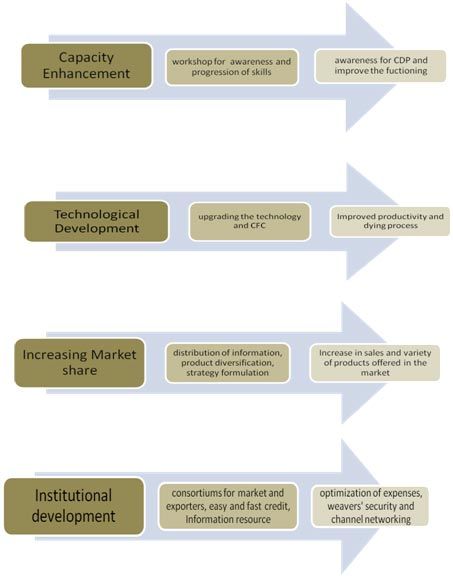 Impacts of the Scheme 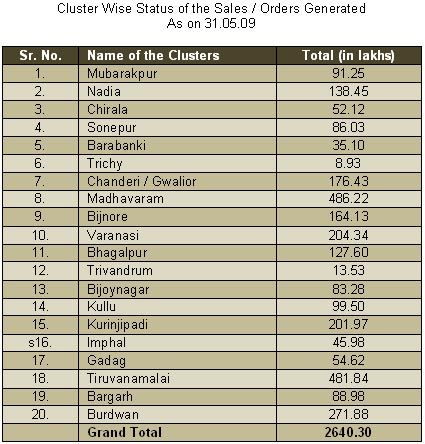 This process involves customization of the designs and products as per the requirements of the customers. Emphasis has also been laid on developing designs for each season i.e., summer, spring, winter, autumn, etc.

The weavers are encouraged to bring out export-oriented products to provide a boost to the handloom exports. This attempt has not only been helpful in providing continuous employment but also increased wages to the weavers and craftsmen.


Switching over to the marketable varieties and better value-added products such as home furnishings, foot-mats, made-ups, kitchen materials, other utility items, etc is also a major step to grab the consumer market keeping in mind their tastes and preferences.

Benefits to the Weavers

We see a bright future for handloom sector in India past 2015, even if it's the most morose analysis. Though, the working conditions for handloom weavers are likely to beg off which can only be averted if proper interventions are initiated and implemented in this scheme. Government is likely to reduce its role further; competition is likely to increase from other sub-sectors of Indian textile industry, with government playing an adherent role. However, the bright future of handloom sector is ensured by the very trait of this competition i.e., striking at the weakest point at the best time. Environmental changes and emphasis on conservation of natural resources should be able to lend a helpful hand the handloom sector. However, one needs active government support here in all the states and clusters. Markets, both domestic and foreign, would continue to demand handloom products given the exclusivity and niche factors inherent in handloom production but handloom sector would be constrained by the raw material accessibility issues in at least few clusters, if not all. Anyhow, these clusters caters to the needs by providing knowledge of the local throng of the area, skills, workers and resources of production which help them to survive the competitive market and achieve higher economies of scale as compared to non-cluster organizations. These clusters, though multifarious, have the capability to magnetize the resources and efficient workers from distant locations as well.

By:
Fibre2Fashion
Published: Jun 2010
Reuse this Content
Our Clientele