Spinning is an ancient textile art in which plant, animal or synthetic fibers are twisted together to form yarn (or thread, rope, or cable). For thousands of years, fiber was spun by hand using simple tools, the spindle and distaff. Only in the High Middle Ages did the spinning wheel increase the output of individual spinners, and mass-production only arose in the 18th century with the beginnings of the Industrial Revolution. Hand-spinning remains a popular handicraft.

Characteristics of spun yarn vary based on the material used, fiber length and alignment, quantity of fiber used, and degree of twist.

The origins of spinning fiber to make string or yarn are lost in time, but archaeological evidence in the form of representation of string skirts has been dated to the Upper Paleolithic era, some 20,000 years ago.[1] In the most primitive type of spinning, tufts of animal hair or plant fiber are rolled down the thigh with the hand, and additional tufts are added as needed until the desired length of spun fiber was achieved. Later, the fiber was fastened to a stone which was twirled round until the yarn was sufficiently twisted, whereupon it was wound upon the stone and the process repeated over and over.

The next method of twisting yarn was with the spindle, a straight stick eight to twelve inches long on which the thread was wound after twisting. At first it had a cleft or split in the top in which the thread was fixed; later a hook of bone was added to the upper end. The bunch of wool or plant fibers is held in the left hand; with the right hand the fibers are drawn out several inches and the end fastened securely in the slit or hook on the top of the spindle. A whirling motion is given to the spindle on the thigh or any convenient part of the body; the spindle is then dropped, twisting the yarn, which is wound on the upper part of the spindle. Another bunch of fibers is drawn out, the spindle is given another twirl, the yarn is wound on the spindle, and so on

The distaff was used for holding the bunch of wool, flax, or other fibers. It was a short stick on one end of which was loosely wound the raw material. The other end of the distaff was held in the hand, under the arm or thrust in the girdle of the spinner. When held thus, one hand was left free for drawing out the fibers

A spindle containing a quantity of yarn rotates more easily, steadily and continues longer than an empty one, hence the next improvement was the addition of a weight called a spindle whorl at the bottom of the spindle. These whorls are discs of wood, stone, clay, or metal with a hole in the center for the spindle, which keep the spindle steady and promote its rotation. Spindle whorls appeared in the Neolithic era.

Modern powered spinning, originally done by water or steam power but now done by electricity, is vastly faster than hand-spinning.

The spinning jenny, a multi-spool spinning wheel invented circa 1764 by James Hargreaves, dramatically reduced the amount of work needed to produce yarn, with a single worker able to work eight or more spools at once. At roughly the same time, Richard Arkwright and a team of craftsmen developed the spinning frame, which produced a stronger thread than the spinning jenny. Too large to be operated by hand, a spinning frame powered by a waterwheel became the water frame.

In 1779, Samuel Crompton combined elements of the spinning jenny and water frame to create the spinning mule. This produced a stronger thread, and was suitable for mechanisation on a grand scale.

In the 20th century, new techniques including Open End spinning or rotor spinning were invented to produce yarns at rates in excess of 40 meters per second.

Yarns can be made of two, three, four, or more plies, or may be used as singles without plying. Two-ply yarn can also be plied from both ends of one long strand of singles using Andean plying, in which the single is first wound around one hand in a specific manner that allows unwinding both ends at once without tangling. Navajo plying is another method of producing a three-ply yarn, in which one strand of singles is looped around itself in a manner similar to crochet and the resulting three parallel strands twisted together. This method is often used to keep colors together on singles dyed in sequential colors. Cabled yarns are usually four-ply yarns made by plying two strands of two-ply yarn together in the direction opposite to the plying direction for the two-ply yarns. 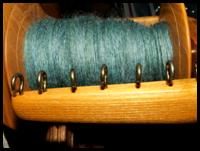 To make various yarns, besides adding random elements, spinners can vary all the same things as in a machined yarn, i.e. the fiber, the preparation, the color, the spinning technique, the direction of the twist, etc. A common misconception is yarn spun from rolags may not be as strong, but the strength of a yarn is actually based on the length of hair fiber and the degree of twist. When working with shorter hairs, such as llama or angora rabbit, the spinner may choose to integrate longer fibers, such as mohair, to prevent yarn breakage. Yarns made of shorter fibers are thus also given more twist than yarns of longer fibers, and are generally spun with the short draw technique.

The fiber can be dyed at any time, but is often dyed before carding or after the yarn has been spun.

Wool may be spun before or after washing, although excessive amounts of lanolin may make spinning difficult, especially when using a drop-spindle. Careless washing may cause felting; when done prior to spinning this often leads to unusable wool fiber. In washing wool the key thing to avoid is too much agitation and fast temperature changes from hot to cold. Generally washing is done lock by lock in warm water with dish-soap.

A tightly spun wool yarn with no air in it is called worsted; it is handspun from a roving or combed top, and the fibers all lie in the same direction as the yarn. A woolen yarn, in contrast, is handspun from a rolag, where the fibers are not as strictly aligned to the yarn created. The woolen yarn thus captures much more air, and makes for a softer and generally bulkier yarn. There are two main techniques to create these different yarns; short draw creates worsted yarns, and long draw creates woolen yarns. Often a spinner will spin using a combination of both techniques, and thus make a semi-worsted yarn

Short draw spinning is used to create worsted yarns. It is spun from combed roving, sliver or wool top. The spinner keeps their hands very close to each other. The fibers are held, fanned out, in one hand, and the other hand pulls a small number from the mass. The twist is kept between the second hand and the wheel- there is never any twist between the two hands.

Long draw is spun from a carded rolag. The rolag is spun without much stretching of the fibers from the cylindrical configuration. This is done by allowing twist into a short section of the rolag, and then pulling back, without letting the rolag change position in your hands, until the yarn is the desired thickness. The twist will concentrate in the thinnest part of the roving, thus when the yarn is pulled, the thicker sections with less twist will tend to thin out. Once the yarn is the desired thickness, enough twist is added to make the yarn strong. Then the yarn is wound onto the bobbin, and the process starts again.

Spinners who don't spin in the grease generally buy their fibers pre-washed and carded, in the form of tow or roving. This means less work for the spinner, as they do not have to wash the lanolin out. It also means that one can spin predyed fiber, or blends of fibers, which are very hard to create when the wool is still in the grease. As machine carders cannot card wool in the grease, pre-carded yarn generally isn't spun in the grease. Some spinners, however, use spray on lanolin-like products to get the same feel of spinning in the grease with this carded fibre