Production of wild silk in Africa has a tradition for hundreds of years, yet, has been away from the common sight. About 60 species of wild silkmoths are known alone in East Africa. The authors have undertaken a silk journey to seven African countries to explore the practices there, and introduce the readers to many facts hitherto unknown in the lands outside.

It is common knowledge that trees disappear and forests deteriorate rapidly in many parts of Africa, partly because of over-felling, in particular for firewood, and also worsening and increasing periods of droughts.

When one does not re-plant, problems are created not only for the supply of fire wood for cooking food, but also for supply of other products from trees. More the products and higher the value of these products, more are the farmers interested in preserving such trees, and protecting them from being felled.

Wood is not the only important direct return from trees, but also for feeding animals. This is the case with honeybees, sucking nectars from flowers, and with insects that feed on leaves. Larvae of wild silkmoths belong to the latter group. About 60 species of wild silkmoths are known alone in East Africa.

On a seven-week silk journey to seven African countries during October-November, 2007, the authors experienced that peasants-apart from rearing cocoons of mulberry silkmoth-grew and collected silk cocoons of four wild silkmoth species in Kenya, Uganda, South Africa, Madagascar and Burkina Faso. They also saw people weaving silk fabrics from yarn spun by larvae of both the mulberry and wild silkmoths. The wild silk is sumptuous, thick, light brown and with a raw structure that may be labelled as African silks.

Silk from wild silkmoths has presumably been spun for hundreds of years in Africa, but only few people outside the continent have been aware of this.

In 2007, the villagers in Safan village in Burkina Faso, West Africa processed silk from a yet unidentified species of a wild silkmoth. The Silk Association in the village consists of 43 members, 32 women and 11 men. As elsewhere in West Africa, men are weaving the narrow fabrics on strip looms, whilst the women remove the silk from the cocoons, card and spin the raw silk, and finally sew the narrow woven lengths together.

The procedure is that the cocoons are collected from certain tree species, locally called Coco Yiri and placed in water with potash. The cocoons are boiled and thereafter kept in a clay container with water for about a month. This will dissolve the sericin that keeps the threads in the cocoon together. Thereafter, the silk can be removed from the cocoon and carded, just like one cards the wool. Then, the silk is spun on a hand spindle (distaff). Finally, the yarn is dyed and dried and the men can start weaving. They weave fabrics with broad bands of cotton integrated with narrow bands of silk. Lack of cocoons restricts the size and numbers of silk bands.

The trees from which the cocoons are collected have become scarcer and people must move up to 50 km to find them. The long distance to the cocoon resource is a big problem for the Silk Association. They wish to get tree seedlings to be planted in the neighbourhood of the village.

The problem of conserving trees that provide food for wild silkmoths is not unique. In Madagascar, the tree species Tapia (Uopaca bojeri) is the host plant for the wild silkmoth Borocera madagascariensis. Because the Tapia-forests are under heavy pressure from over-felling, several NGOs now assist with a programme of improved cultivation of the silkmoth combined with planting of young Tapia trees.

Same is the case in the north-eastern part of Kenya, where the larvae of the wild silkmoth Gonemeta postica feed on leaves of several Acacia species. With the support from the International Centre for Insect Physiology and Ecology (ICIPE), a Farmer Association has established a market place for wild silk cocoons, for its members. The cocoons are then spun and woven to so-called Savanna silk. Cocoons of Gonometa are also utilized in South Africa, where production of shawls, cushions, dresses, teddy bears and many more products takes place. Tourists buy most of the silk wares.

The Commercial Insect Branch of ICIPE, led by Prof. S.K. Raina, supports activities in several African countries. In order not to extinct the wild silkmoths, members of Silk Associations are being trained by ICIPE-staff in controlled management of the silkmoth and the trees. Farmers collect cocoons which are placed in a small cage of nylon net. After emergence, the adult female moths mate and lay eggs. The small larvae are transferred to small trees, covered by nylon net bags. Here, the larvae feed and spin their cocoons, which finally are collected by the farmers. The farmers are interested in conserving the trees and plant new seedlings themselves. 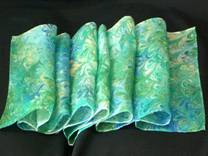 Both in Kenya and Nigeria, larvae of wild silkmoths (Anaphe panda and Anaphe infracta, respectively) live in colonies on tamarind trees. A colony consists of several hundreds of larvae spinning themselves into one big light bright cocoon bag, surrounding lots of individual white cocoons. In Kenya, the silk is called Rain forest silk. In some places, the cocoons are hunted by people, who find the pupae inside the cocoons to be a great gastronomic delicacy. Silk of another wild silkmoth species in Kenya (Argema mimosa) is produced and sold under the name Sea breeze silk.

We are convinced that wild silkmoths are utilized in several other places in Africa, and that the idea of using this type of silks could be spread to even more countries and locations with the tradition of weaving. Farmers just require a bit of assistance to find and grow the host trees for a specific silkmoth and may be some support to market the woven products.

One of the main problems for African peasants is lack of cash, necessary for a better livelihood and providing their children an education. Such money can be obtained from small activities such as sale of fruits from wild trees or products from insects living on trees, like honey and wild silk. In the large context, these activities may seem insignificant, but for poor peasants, they are often seen as means to development away from poverty.

In Africa, small initiatives often give relatively big returns. And when the initiatives combine economy and ecology, the investment becomes sustainable. It is better to implement one down-to-earth idea than to have ten good, but ambitious ideas on stock!

References: Researchers at ICIPE have been main contributors. The authors travel in Africa resulted in a book, written together with ICIPE researchers: African Ways of Silk. Ancient threads-new possibilities, by Ole Zethner, Rie Koustrup and Suresh Kumar Raina and published by The Centre for Advanced Studies of African Society (CASAS) in Cape Town, South Africa.