Glimpses of the G20 Summit: Achievements and Results

The G20 leaders devised a historic agreement during the 2010 summit that has put the event at the centre of their efforts, attempting for a durable recovery and evading the financial frailty. Global economic crisis has made businesses realize the bitter fact that macro economic imbalances can cause enormous havoc on the economies; all across the globe. Sputtering for recovery, countries attempt for actions that provide strong economic recovery, and job growth. The G20 Summit was an agreement of framework for a balanced and sustainable growth for the revival of the overall economy of the countries. The summit was organized eclipsing the G-8 in Canada. While this was not appreciated in some circles, a few optimists believed that it would create a close co-ordination between the G8 and the G20 presidencies.

Executed in Toronto, Canada, the G20 was planned with a perspective of focusing on three key issues; the view of its members in relation to global development, the gain they acquire by acting as a group, and finally how they hold themselves accountable for the transformation. Issues discussed at the summit require improvements to the global governance framework. Challenges of the society cannot be solved without a dynamic and emergent private economy. Therefore, corporate responsibility programs were also addressed, which is expected to play a vital role in addressing societal challenges. 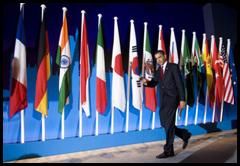 Recession gave a clear message that no one can be spared from its pangs. The collapse of the countries with advanced economies sent tremors to every corner of the world. Global economic recovery was the main focus in the summit. A general consensus was formulated among the members motivating the initiatives taken to sustain private demand. The summit planned on managing the obstacles to the current phase by cutting their deficits by 50% by the end of 2013; making major breakthroughs.

President Obama addressed the friction between the US and EU, and elaborated over how to respond to the global recession. He observed that regulatory framework was drawn from principles developed prior to the summit. The French President Nicolas Sarozy appreciated the American President in persuading China to publish lists of tax havens.

The most substantial G20 action was the commitment into the international monetary fund. The members pledged $1.1 trillion in loans and guarantees to the indigent countries, and agreed to crack down on tax havens and hedge funds. This money will prop up the worlds poorest countries. But, they failed to come up with a sweeping accord on stimulus spending that will batter the economic decline. 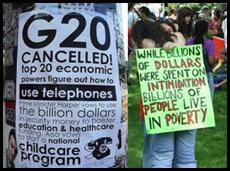 Towards a sustainable future:

With its roster of advanced and emerging economies, the summit was planned to address the burning question of sustainability. Economist Sylvia Ostry positively asserted that sustainable development by a new institution with experts from a variety of backgrounds is the best contribution, the G20 could make. This requires the reduction of emission of greenhouse gases into the atmosphere, as well as greater energy efficiency.

As is a coin with two sides, the G20 summit; brought in huge protests as well; leaving hundreds of protesters against the summit. The summit was encountered by apprehending protesters who disagreed on the issues, leaders, and meetings. The summit arena was enclosed by concrete barricades, and 10 feet metal fences ensuring security costing the Canada Government more than 1 billion USD.

The 2010 G20 is an instinctive sign of the rapid growth of countries like India and China with emerging economies gaining a permanent seat in the enlarged world body. The summit is positively declared as a success that is believed to be a turning point in pursuit of global economic recovery. It is too early to assess the G-20 performance. With the co-ordination of the IMF, the countries of the G-20 will formulate policies, and regulations to contribute to the global imbalance. The rhetorics of the summit must be backed with appropriate actions. The grand promises that are collectively taken at the interest of the countries worldwide would be taken seriously with an effective reinforcement mechanism.