Handlooms and Handicrafts Sector craved for growth sincequite a few years, which has now actually turned prolific. No doubt, India hasan edge against its competitors like China, Philippines, Thailand, Taiwan andKorea who generally produce machine-made products. Indian handmade productshave a niche market all over the world creating a distinct impact throughexclusive designs, workmanship, finesse, colors and raw material etc. Thesector shows a not so significant growth in the 2009-10 fiscal but growssubstantially in the first half of the 2010-11 fiscal. Keeping in view thetrend, the sector is expected to show phenomenal results by the end of 2011. 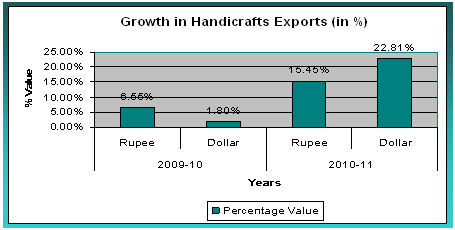 The swiftly rising growth in handicraft exports came aboutafter a two-year collapse, from the second half of the last financial year, andthe upward trend continues till date. Although there has been an increase in all productcategories, however the increase fashion accessories has been commendable.Fashion product section comprise of costume jewellery, hand-printed textilesand scarves, embroidered and crocheted garments, bags and purses, zari supplies, footwear, shawls,belts, chappals, and stolesetc. The average growth of the Fashion accessories section has been around 32%in the first three months of the current fiscal year.

Going alongthe trend shown in the markets we can very well see in the under givenrepresentation that the handicrafts sector after touching the Rs.17000 cr. markin the 2006-07 fiscal started to decline and reached the much lower Rs.8000 cr.mark in 2008-09 fiscal due to the effect of recession. From 2009 latter half,it started to grow and the current scenario indicates to witness the Rs.10000cr. mark by the end of 2010 (represented in Blue). India is not only benefitedfrom its major markets in US and Europe but is also heading towards neweravenues like in Latin America. 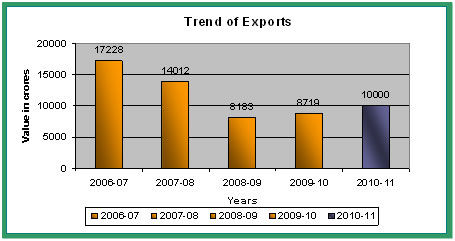 After 11 months of retrenchment since October 2008, export from the handicraft sector turned optimistic in September 2009, registering a growth of over 160 per cent compared to September 2008. The US and EU together account for 70 per cent of the country's handicraft exports. The Secretary of Ministry of Textiles Smt. Rita Menon expressed that the importers of USA, Europe and Japan now wants to have various social and environmental compliances to be made by exporters (producers) from India. The exporters now need to have the basic consciousness and so the norms are being implied by the concerned National and International Authorities. Since the measures are taken in view to keep up with the health and hygiene standards, to produce safe and environment friendly products, and to prohibit usage of perilous and noxious materials in their manufacturing. She insisted to comply with the standards so as to meet the needs of the buyers in qualitative ways, not just focusing on the quantity. The other major reason is to make smooth and hindrance-free exports in future. 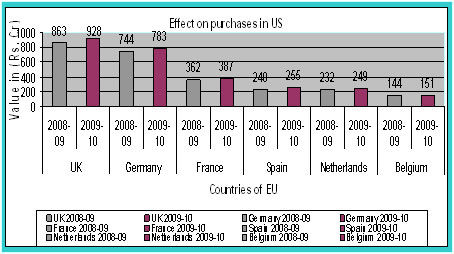 European Union has been the major importer for Indian exports during the year 2009-10 contributing a share of 40.33% of India's total exports of handicrafts to various regions. The above represented graph shows the comparison of the sales pre and post recession.

The major handicraft hubs of world markets are Moradabad, Jaipur, Saharanpur, Jodhpur and Narsapur and they utilize about 1 million people. The Ministry of Commerce, Government of India has set an export target of Rs. 10,000 crore by the end of this year. To achieve the target, there is a need to chalk out a clear-cut export strategy. Some of the points which may provide advantage to it is promotion of lesser known and environment friendly crafts viz. paper and jute-based handicrafts, exploring non-traditional markets in the regions of South America and South Africa, and Israel, upgradation of quality to make India's crafts competitive enough in the international market, organizing training programmes for expanding skills of the craftsmen, upgrading technology and introducing contemporary tools for making improved production, organizing workshops, sponsoring buyer-seller meets and trade-fairs, undertaking R & D in areas such as technology, manufacturing process, designing, and product development.

By:
Fibre2Fashion
Published: Jul 2010
Reuse this Content
Our Clientele