Increasing Repo & Reverse Repo Rates: What is the Industry Impact?

Inflation rates are climbing up constantly, above 10% during the recent months, concurrently resulting in an increase in the pricing power. To anchor the inflationary trends, the Reserve Bank of India (RBI) has increased its key rates for the fourth time in the same year. During the first quarter of 2010-11, RBI increased its repo rates to 5.75%, and the reverse repo rates to 4.5%. Repo rates are the rates at which RBI lends money, and reverse repo is the rate at which it borrows money from other banks. Reverse repo rates act as a floor, and repo rates; as a ceiling. 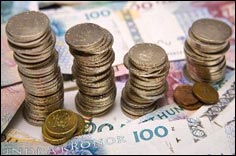 When domestic banks are in short of cash, and overnight call money rates are higher than the repo rate, banks approach RBI for cash. Therefore, lending money under repo rates is an effective policy tool, as it aids in minimizing rates in the overnight market. When liquidity is tight, and banks require cash for a short term, repo rates are useful. The reverse repo process occurs when money market rates fall below the reverse repo rate. Hence, reverse repo is more effective, when there are surplus funds with the domestic banks.

Non food items account for 70% of the WPI (Wholesale Price Index). Recent increase in fuel and electricity is expected to further push inflation rates higher in the short term. Raising the reverse repo rates enable RBI to narrow the term for short term loans thus reducing the volatility. RBI aims to keep the liquidity under control, and further restrict excess liquidity from diluting the policy rate actions. The bank also contemplates to increase its frequency of reviewing the monetary policy. There would be 8 policy announcements in a year instead of 4. The next review is planned during 16th September followed by the one in 2nd November.

Economists predict intermittent liquidity tightness in the future, making the repo rates to remain as the operative policy rate. This implies another 150 bps (basic points) of tightening in the operative policy rates from reverse repo to repo rates over the past two months. Though the liquidity is tight, RBI has left the Cash Reserve Ratio (CRR) untouched at 6%. CRR is the compulsory amount of cash; banks have to keep with RBI. This will increase the interest rates charged by banks, thus putting pressure on the industries.


Some industry players are pessimistic regarding the hike. They believe that the RBI decisions will result in a rise in the lending rates. They fear that borrowing costs will go up, and high borrowing costs will impediment business activities. Hike in lending rates will add pressure on the loans by banks. The current credit market is experiencing tightness, and interest hikes might further tighten the cash availability in the market. While hike in rates are planned for curbing inflationary expectations, it would not immediately limit the same.


RBI is currently attempting a balancing act by managing the inflation and fostering growth rates at the same time. It believes that narrowing the gap between the repo and the reverse repo rates will make pricing easier in the market. One more hike in the rates is on the cards for RBI with the next review planned for September. Optimistically, it can be expected, the inflation would be under control by then.