Dyes and dye intermediates consist of basic dyes; azo acid and direct dyes; disperse dyes; fast color bases; reactive dyes; sulfur dyes; vat dyes; organic pigments; naphthols; and optical brighteners. Market demand for dye and dye intermediates is expected to grow at a Compounded Annual Growth Rate (CAGR) of 4.7%, from 652,000 tonnes in 2004-05 to 900,000 tonnes in 2010-11. The organized sector dominates, with 65% share of the total market, while the unorganized sector controls the remaining 35% of the market. However, owing to stringent environmental regulations and awareness among customers, the cost of operations for small, unorganized players is likely to increase, thereby shrinking their share in the industry. The demand for dyes and dye intermediates is expected to grow at around 6% during 2009-10, backed by strong demand from the textiles, leather, and inks industries, which are expected to register a growth rate of 6%, 4%, and 11%, respectively. Exports of dyes are also expected to increase by 6.4% due to the shift of production bases from developed countries to India on account of stringent pollution control measures being adopted in those countries. 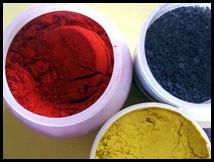 Dyestuff sector is one of the core chemical industries in India. It is also the second highest export segment in chemical industry. The Indian dyestuff industry is made up of about 1,000 small scale units and 50 large organized units, who produce around 1,30,000 tonnes of dyestuff. Maharashtra and Gujarat account for 90% of dyestuff production in India due to the availability of raw materials and dominance of textile industry in these regions. The major users of dyes in India are textiles, paper, plastics, printing ink and foodstuffs. The textiles sector consumes around 80% of the total production due to high demand for polyester and cotton, globally. Globally the dyestuffs industry has seen an impressive growth. Initially the industry's production bases were mostly in the west, but in the last few years, they have been shifting to the East. Dyestuff can be used for Printing inks, plastics, textiles, paper and foodstuff. The world consumption for dyestuff accounts for printing inks at 40%, paints 30%, plastics 20% and others from segments like textiles.

The dyestuff industry has recently seen movement towards consolidation and as a result, organized players are now poised to take a lead in the global market. Small units (around 1000) that exist today still compete in the segments where price realization is lower and the competition severe. Large and organized players (around 50) are gearing up for global competitiveness leveraging technology, product innovation and brand building. Increased focus is being laid on environmental friendliness and at the same time the industry is ensuring greater customer focus through technical services and marketing capabilities, in order to face global competition. 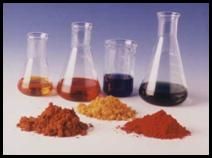 The growth of dye sector in the future continues to depend on the performance of end user industries like paints, textiles, printing inks, paper, plastics and foodstuffs. The changing customer preferences, boom and expansion of infrastructure in certain parts of the world creates new market opportunities for the dye industry. To achieve global standards the industry needs to put efforts in critical areas so as to adopt aggressive growth and focus on exports, R&D, comarketing alliances, up-gradation of manufacturing facility, contract manufacturing with companies having established markets, identification of areas of core competence, consolidation, collaboration by cluster development, outsourcing, environmental consciousness, cost reduction etc. The industry is likely to see many new dyeing technologies coming into the market with the help of good technical expertise and R&D achievements. Globally the high usage of cotton, polyester and the banned vat and azo dyes in some of the countries has paved the way for reactive and disperse dyes. It is expected that in future these two dyes would lead the market. The Industry feels unless the labour laws, power supply and infrastructure are improved, it would be very difficult to compete globally with rapidly declining duty differentials and appreciation in the value of rupee.

In order to help the Industry to grow to international standards, the Government would require to take the following steps: