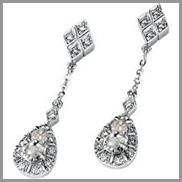 Moissanite, the sort of Moissanite which appears in jewellers, is a man-made crystal which imitates some gems found in a meteorite in the late nineteenth century. The star-crystal is too rare to be used in the jewellery industry, but the synthetic imitation has been in use since the 1990s. Moissanite pendants and other jewellery are very popular, due to their use by movie stars and models, as well as by its relative cheapness and its closeness to diamonds. The crystal can be cut into any of the usual gemstone styles, and used to fashion Moissanite earrings or rings.

Although Moissanite has been seen as a diamond replacement by some jewellers, the crystal is beautiful in its own right, and many people like the fire and brilliance which Moissanite has, which can be twice as much as a natural diamond. Moissanite wedding bands are exceptionally desirable, as they combine the glitz and elegance of the traditional diamond ring with the reasonable price and extra sparkle of the Moissanite. Even a normally expensive ring set in precious metal can become much cheaper if the man-made crystal is used; a platinum Moissanite ring is a great alternative to the expense of a diamond. 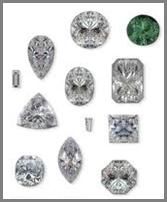 As Moissanite has become more popular in recent years, the crystal is now being used regularly in different styles of jewellery, and it is relatively easy now to find Moissanite pendants and Moissanite earrings available. The gem is still limited to selected sellers, though it seems unlikely that the company will stop producing it soon. Despite the availability of the stone, commentators are noticing Moissanite's fashionable status, and the glamour which is now being associated with it, and predicting that Moissanite may well become a valuable item in time.

Like a diamond, Moissanite is a very hard stone, with a hardness value almost equal to that of diamonds. This makes it very scratch-resistant, and therefore Moissanite is a long-lasting, durable crystal. The natural colour of the gem is unlikely to fade or change with time, unlike other coloured synthetic stones, so buyers can be sure that Moissanite will retain its fire and luster for as long as they wear it. This is essential in a wedding band, but also holds true for other jewellery such as pendants and bracelets. Moissanite is a cost-effective and durable alternative to any traditional white gem, so when your budget is out of diamond's price range Moissanite will be your best alternative.