Banarasi brocade boastsof the traditional culture and the narration of rich Indian textiles, which istrue. It has been a substance of admiration for all andfrom the times of Kingdoms and Palaces to the todays modish ethnicity.

Banarasi Brocade is said to haveits origin from the very older times like Buddhist period. There is also asecond statement that it has its origins from Mughal Empire during 14thCentury. Women were too much fascinated towards these fabrics, who have beenattiring cottons since long time.

Brocades are the textile which hasa regular weaving where the weft thread passes over the warp normally. Usually,when a gold and silver thread is densely woven with the textile thread specialthreads are riveted in between by omitting along the channel of the standardweft over a definite quantity of warp threads according to the pattern and omittingis done regularly through set type of patterns.

Selects of Banarasi saris that areavailable in the market are Tanchoi, Jangla, Vaskat, Cutwork, Tissue, andButidar that are made of silk weft and brocaded with additional weft styles indifferent outputs with designs like buties, bells, creepers and buttas in thebase or on the border for alluring look.

Tissue Saree- The renowned Zari brocade weavers of Banaras have evolved a technique of weaving tissue material which looked like golden cloth. By running Zari in weft a combination of Zari and silk in extra-weft (pattern thread) and silk in warp, the weave of this sari has densely patterned with golden lotuses floating in a glimmering pond. The 'drops of water' are created by cut work technique. The borders and the end panel have a diaper of diamond patterns enclosed by a border of running paisley motifs. Tissue saris are most popular as wedding saris among the affluent. Tissue sari has glazed, shining character due to the use of real gold Zari/Silver Zari in weft on silk warp ground are ornamented with the particulars traditional design such as Jangla Butidar, Shikargah menadar etc.

Cutwork Saree- This saree is all set by cut work technique on plain base after eliminating the hovering thread which is not woven during the weaving process giving a transparent look. Cut-work is the cheaper adaptation of the Jamdani. In cut work the pattern is made to run from selvage to selvage letting it suspend freely between two motifs and the extra-thread is cut by hand, giving the effect of Jamdani

Saree- The most eye-catching characteristic of this pattern is that it is brocaded with threads in gold, and silver and silk. Due to darker shade of gold and lighter of silver, this variety of patterning in brocade is conventionally known as Ganga-Jamuna, signifying the meeting of these two rivers which have dark and light shades of water. The main motif of this pattern is a flower or a bouquet of flowers. A somewhat smaller and dappled bouquet is spread all over the base. 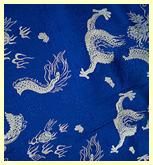 World wide recognition and protection is now provided to the Banarasi brocade. In order to certify that, a GI certificate is granted by the Centre, under the Geographical Indication of Goods (Registration and Protection) Act, 1999 as a symbol of guarantee and protection. It pledges that the product under consideration was produced in a particular geographical region or locality from where it draws its unique individuality. It act as an assurance to the user that his money has been exhausted on an authentic good as well as it protects the producer against low-priced goods trying to misrepresent the real relics.

By:
Fibre2Fashion
Published: Sep 2010
Reuse this Content
Our Clientele