An Overview about Usage of Dyes in Textile Industry

Colouring matters, which may be classified as dyes and pigments, have been exploited by man for their aesthetic values and used to embellish various articles and the environment in which man lived over the centuries. Starting with Indigo, the oldest known dye, originating from India; the royal Phoenician's dye, Tyrian purple (or Royal Purple), of the ancient city of Tyre; Alizarin, among the Turkey people and Cochineal, of the European and Mexican dyers, indigenous dye-yielding plants have been discovered in almost every region of the world.

Synthetic dyes were first discovered at the early century. It is only in the 1930's that parenteral route of administration was actually developed: methylene blues, methyl violet are some examples that were used for leprosy and filariasis, respectively. After the 2nd world war, one can observe a rapid decrease of the therapeutic use of dyes by intravenous route. Only a few dyes are still used today, such as patent blue V or fluorescein, as drugs for diagnostic use.

Dyes that are used by the textile industry are now mostly synthetic. They are mostly derived from two sources namely, coal tar and petroleum-based intermediates. These dyes are marketed as powders, granules, pastes or liquid dispersions. The concentrations of active ingredients typically range from 20 to 80 percent. The textile dye segment is characterized by new dyes. These new dyes are regularly developed for meeting the demands of new technology, new kinds of fabrics, detergents, advances in dyeing machineries, along with overcoming the serious environmental concerns posed by some existing dyes.

With the fast changing of the product profile of the textile industry, from high-cost cotton textiles to the durable and versatile synthetic fibers, the pattern of consumption of these dyes is also going through rapid changes. Nowadays, Polyesters account for a major part of dye consumption. Accordingly, disperse dyes that are used in Polyesters, are also projected to grow at a faster rate.

If we take general dye chemistry as one of the basis for classification, textile dyestuffs can be grouped into the following categories for an easier understanding.

For convenience all the above dyes can be clubbed together into three categories namely:

Usage of Dyes in India

Before textiles reach the consumer, they go through many different physical and chemical processes. They may be treated with chemicals to dye, make them more hardwearing or wrinkle-resistant, or less flammable. Chemicals used in textile industry are carcinogenic and others may trigger allergic reactions. Some flame retardants that are used in certain textiles contain organic bromine compounds that are persistent (break down very slowly in the environment). Textile industry is known to use restricted chemicals such as azo dyes and formaldehyde. 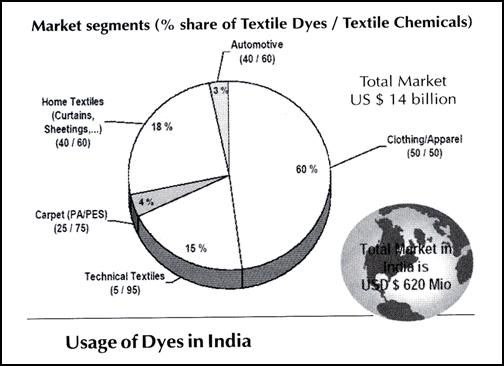 Manufacturing of all variants of textiles have an impact on the environment. Usage of raw material and other natural resource inputs such as water etc have not only resource depleting impacts but release of effluents or emissions have natural resource degrading impacts. The industry is known to use large quantities of water during its processing.

Problems involved in usage of dyes

To drive home the criticality of integrating environmental concerns Tirupur industrial cluster in Tamilnadu, India is being used as illustration.

The textile industry in India was expected to achieve the targeted export of US by the year 2010. But, such growth is now greatly hampered due to immense environmental damage due to the effluents released from the textile units to caused to the Noyyal river, ground water system and agricultural fields mainly due to the textile wet processing industries. Textile manufacturers use energy as a raw material input to the manufacturing process or for some other purpose usually referred to as non-fuel use.

Electricity consumption is increasing in textile mills. Textile manufacturers have to deal with rising energy and other supply costs. For e.g.: Dow Chemical Co. and DuPont both raised prices on nearly everything they sell, from chemicals used in bathroom cleaners to freezer bags and kitchen counter tops, because of high raw materials costs.

A complete survey of how developments in the textile industry and consumers of its products have affected the environment in the past needs to be taken up. This should also cover the most recent solutions adopted by the industry to alleviate the problems. This is important given the high textile production targets post 2005, and the ways in which the industry is responding to the environmental challenges.

Thus, for Indian textile sector, the main drivers for environmentally benign growth can be:

Textile sector cannot have independent growth strategies that are bereft of environmental concerns arising at various points of value chain because environmental costs are proving to be a drag on its own long term growth and development.

The Authors are associated with Dept. of Management (UG) Karpagam University Coimbatore.