Labor is the first price, the original purchase money paid of all things. Two years after the fright of recession, apparel exporters; now see a bounce back in their business due to scarcity of new hire, and lack of skill sets among the existing labor force.

Global clothing business is at a critical stage of stabilization and recovery. Global textile and apparel industry is predicted by analysts to grow and reach 805 billion USD by 2015. Apparel sector is expected to grow even faster than textiles. Despite all the rosy hopes, the industry is currently witnessing acute labor shortage of 15-20%. Lack of skilled labor force is also an added woe of the industry.

Global textile and apparel industry holds a promise of creating an additional 12 million jobs by 2012. Of this 5 million jobs would be involved in the core technological areas of production activities. The remaining 7 million jobs would be in the supporting and auxiliary sectors. Hence there is urgency for increased manpower. It is more important that the industry requires skilled workforce. But unfortunately, the industry is suffering from malnutrition of both. Very less workers are available for garment industries, as more and more people are moving towards other sectors. Companies are finding it difficult to hire new employees. The workforce existing in the industry currently is also lacking adequate skill sets. 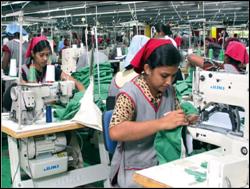 Pressure of the garment industries such as short lead times, and more focus on productivity does not attract the semi-skilled workers any longer. The already existing issues related to labor such as disputes in wage structure has added fuel to the problem. Attractive wages available in alternative professions are also worsening the issue. A proportion of skilled women are not participating in the workforce. High turnover rates and steep wage inflation are eroding the competitiveness of the industry.

A recent survey on garment employees reveals that 90% of the workers suffered some ailment during their tenure. 75% of the workers had sound health before they entered the garment industry. Health threats occur more frequently in garment factories due to unfavorable working conditions, lack of staff facilities, inflexible terms, and conditions of garment employment, low ways, and work place pressure. Garment workers henceforth seek alternative jobs. This is one of the major issues resulting in labor scarcity. 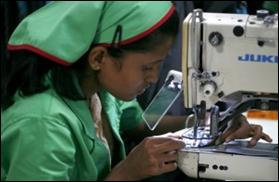 India has earned a reputation in the global apparel market as an attractive off shoring due to its labor force. However, currently the trend is deteriorating. Main apparel hubs of Coimbatore, Delhi, Ludhiana, Kolkata, Jaipur, and Bangalore have already started feeling the scarcity of skilled labor. Man power requirement in Indian apparel sector is more than 1.5 million semi-skilled and 3 million professionals for a year.

In China, labor shortage is forcing companies to increase wages. On an average, one out of every seven labors has switched their jobs during the previous year. Chinese factories are seeing a shrink in their margins by 5%. Salaries jumped by an average of 8.4% in the recent months.

Companies are devising new strategies to attract workers. Women workers are believed to posses high efficiency levels, and show more dedication towards work. Level of absenteeism and attrition is lesser among women workers. Companies are therefore encouraging women into the production process. Women staffs are offered pick and drop, or hostel facilities near the factory premises.

Plans are chalked for running the factory the interior of the country where labors are recruited. Companies such as Laguna Clothing and Bombay Rayon Fashions are pioneering in the process. Apart from this, offering commutation from the nearby small towns and villages, hostel facilities, tapping NGOs for employing workers are considered. Possible alternatives such as automated solutions to cut down man power requirements are also being evaluated.

Time honored work systems and moral practices need to be adopted in the garment industry. Wages and cost of living will adjust upward, and companies can enjoy the benefits of low-cost labor only for 4-5 years window. Global labor scarcity proves the corollary that in the long run there would be no free lunch.