Share of cotton in global fibre usage was estimated to be 36.5% during 2009. This trend is likely to decline in 2011-12 due to the unprecedented rise in the price of raw cotton. Soaring price of cotton is having its impact in all manufacturing destinations. What can be done to generate an acceptable equation among all participants of the textile and apparel chain?

Global garment industry has struggled with recession during the past two years. Now, the economy is getting out of the doldrums seeing a gradual recovery. Notwithstanding the same, market is in mayhem due to one or the other issues such as labor unrest, yarn prices etc. Latest addition to the issue list is the mounting prices of cotton. Garment makers are paying top dollar for purchasing raw cotton.

The calculus of cotton is very erratic without any clues of the future fluctuations. Garment exports have suffered serious drawbacks due to costs and the division that lies between the buying prices, and the instability of raw material costs. Fabric costs account for 60-70% of the apparel price. There is an unusual rise in the price of cotton since August 2010.


Increase in the price of cotton is further fueled by natural disasters such as floods and rain in the major cotton producing areas such as Pakistan, China, and slashed crops in Australia. Pakistan, the worlds fourth largest cotton cultivator is currently facing a shortfall of 2.5 million bales. A cotton report from Australia states that nearly 3, 00,000 bales were lost as tropical cyclone pounds the northeastern part of the country. Bloomberg reports that Cotton inventories monitored by ICE Futures U.S. tumbled 85% since June 1st, and prices have more than doubled. (Source: bloomberg.com)

China, the world biggest consumer of cotton sees an increased demand for the white gold, resulting in a further price surge. During 2010, the country witnessed an 86% increase in cotton imports. The country is assertively buying raw cotton to meet the strong demand. In Australia, cotton prices skyrocketed to a 140 year high. The deadly flash of floods that swept across the country has stoked a fear that cotton growers of Australia will not be able to meet their contractual obligations which will push the price even higher. 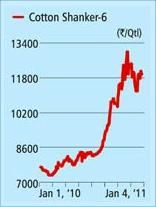 Speculating buying and strong demand from China took cotton prices to new heights in the Asian markets. Prevailing uncertainties in the global textile production weakens physical demand fairly. Estimated cotton production in India for 2010-11 is 32.5 million bales, but due to natural calamities, Southern India Mills Association (SIMA) predicts that the output would not exceed 29 million bales. The benchmark Shankar-6 variety prices which was `7,677 on January 2010, surged to `12, 092 by December 2010. Farm officials are now supporting a rise in the export quota for raw cotton, while Textile Ministry is opposing it. 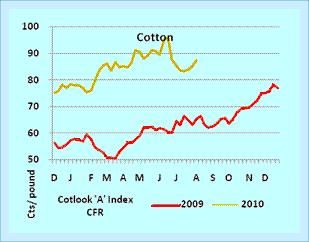 Rising prices of cotton has made it the leading commodity of the bull-market. Price rise will pressurize the input costs impacting the margins. This is expected to be passed on to the ultimate consumers. In India, apparel associations have organized country-wide protests against cotton exports. In lieu, the Government has also capped the cotton exports more than once so as to control the domestic supplies and prices. This has evoked mixed reactions among the industry people.

While the yarn manufacturers enjoyed profits, spinners, and international buyers were disappointed. The Government has a tough time to strike a happy balance among all people involved in the textile chain.

Industry analysts predict that increasing price of raw cotton will cause a rise in the price of cotton, and cotton blended apparels. Though the shoppers are not hit yet, clothing companies estimate prices will start climbing this summer. Apparel makers will pass the cost increase to the consumers. The International Cotton Advisory Committee predicts that prices of cotton will come down, as there would be a tendency among the consumers to seek alternative options. They might tend to shift towards substitutes like synthetic fibres. By now, there is a slight shift in fibre blends at the spinning level, benefiting the polyester fibres. 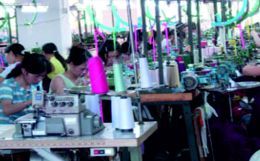 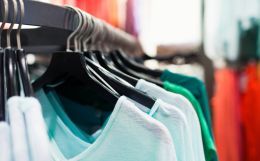