Ifpioneer golfer Babe Didrikson Zaharias were to return to a professional oramateur golf tournament of today, she would be completely out of place as faras golf apparel is concerned. Her crushed and flat golf cap has now beenreplaced by women's golf hats of all patterns and descriptions that aresimilar in shape and appearance to baseball caps and far more comfortable thanany women's hats of her era. Admittedly, and despite her nickname, thismulti-talented athlete of old actually eschewed femininity in her behaviour anddress, but even a more conformist female golfer would have worn a cap thathardly screamed femininity or fashion. Even her more conformist contemporary,Patty Berg, was photographed wearing a beret, which, while perhaps morefeminine than Zaharias's almost military looking cap, hardly scored much interms of practicality as it did little to shield her from the sun.

Otherstyles of women's golf hats from the earliest era of women's professional golfincluded shapeless sun hats, again a far cry from the fashionable, attractiveand practical women's golf hats and visors worn by professionals and amateurstoday. As for other aspects of women's golf apparel, it was based around askirt or dress and often included a cardigan sweater, and it was only duringthe 1960's when, following street hemline trends, shorter skirts began toappear on the golf course.

Itwas indeed during the 1960's and 1970s that today are unmistakably femininecolors and practical, comfortable styles of women's golf apparel and golfaccessories began to appear on golf courses. Nancy Lopez was known for sportingan easily recognizable red golf visor, which while wider and not as refined astoday's visors, was certainly a far cry from the hats of two decades earlier,to say nothing of the flowered visors that were worn by British golfers at thebeginning of the 1900's (such flowered visors were featured by the renownedThomas Burberry, whose signature plaid began its appearance on the golfcourse). Golf shorts would soon become a staple of women's golf apparel, andwomen's golf accessories would retain their femininity while reflecting thetrend toward female equality and self-expression that manifested itself in allaspects of a woman's life, from music and fashion to career and education,during that exciting and groundbreaking era. 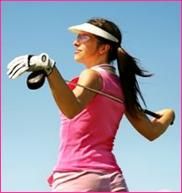 The women's golf apparel of today is fashionable and reflects the image of golf as a pastime for modern and trendy women. It mirrors trends of comfort and femininity for sports apparel in general, with women's golf hats and women's golf visors now available in a range of patterns that are made available by major sporting goods manufacturers as well as by specialty golf hats and visors manufacturers and retailers. For today's women, golf apparel can easily be worn while relaxing after a game, or while exercising to get ready for an afternoon of golf. It is comfortably feminine in an athletic way, and has indeed come a long way from the often restricting golf skirts and shapeless women's golf hats of old.

By:
Carrie Bell
Published: May 2011
Reuse this Content
Our Clientele