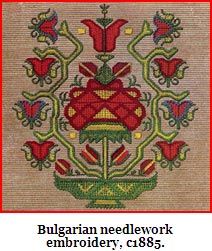 As with much of Eastern and Central Europe, Bulgarian traditional embroidery was very much regionally led. The country's embroidered craft tradition was a particularly rich and profuse one with many regions having strong variations within them so that sometimes small villages and communities could well have their own unique traditions. The subject of Bulgarian embroidery is such a large and generalised one that this article can only be seen as an introduction towards a series of more regionally based articles that will be seen in future posts.

Throughout the history of the continent many European indigenous nations, regions and ethnic groups spent sometimes centuries incorporated into what was effectively occupying nations and empires that often had a substantially different language, religion and culture to that of the localised or regional population. To some extent this continues today with a range of regional and ethnic areas across Europe that are locked into nation states that they share little in common with. 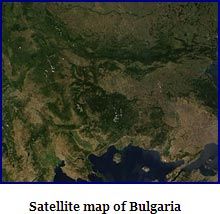 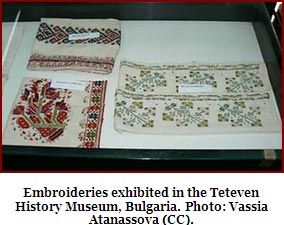 Much of Bulgarian embroidery was worn and therefore became integrated into regional costumes of both men and women. Because of the size and geographical construction of the country, with highlands and lowlands, mountains and valleys, Bulgarian costume varied quite considerably, as could the embroidery that went to embellish and identify the wearer. There was a tradition in various parts of Bulgaria for the use of floral or geometric pattern work. However, sometimes both styles could be seen as part of the same costume with different types of pattern work.

In Western Europe Bulgarian embroidery became popular in the later nineteenth century with amateur embroiderers copying mostly floral type pattern work that had originated in Bulgaria. However, there was a certain amount of manipulation in the decorative styling in order to make the work seem more exotically acceptable and appealing to Western Europeans and therefore these examples should perhaps not be too closely associated with the genuine traditional Bulgarian embroidery, even though they do share a number of significant links. 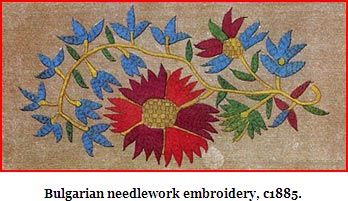 Embroidery work in Bulgaria itself was more or less exclusively dominated by women. Very often a wool or linen background was used with wool or silk threads. However, both cotton backgrounds and threads were also used as was a certain amount of gold thread for detailing. The use of gold has been said to be evidence of one of the few influences from Turkey, though whether this is true or not is probably debateable.

There are a number of decorative motifs that are an integral part of Bulgarian embroidery. The 'tree of life' in particular is repeated fairly frequently in a number of guises, but also crosses, circles and diamond shapes are all part of the tradition. Although most of these motif styles can in fact be seen regionally across the whole of Eastern Europe, it does not negate the fact that this imagery is still very much connected to the early phase of 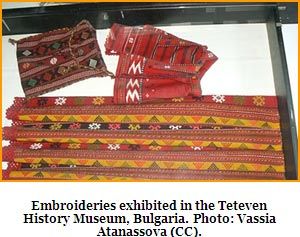 Bulgarian cultural history. It is these repeated motifs, along with other signs and much of the floral based work, which has become such an integral part of Bulgarian craft and culture. The continuing legacy of the uniqueness of the Bulgarian craft system has, over generations, been able to keep the identity of Bulgaria as an entity alive. To some extent at least, the traditional crafts of ordinary Bulgarian women have maintained and eventually helped to procure an independently unique culture and country that is Bulgaria.

Bulgaria is also lucky to have fairly extensive embroidery and folk costume collections that have been built up over a long period. Many towns and cities have regional ethnographical museums which would be the envy of many in Western Europe. A number of examples from these collections will hopefully be highlighted in future articles.