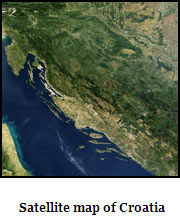 The modern state of Croatia could be said to entail at least three distinct traditional areas, that of Croatia proper, Slavonia, Dalmatia/Istria, along with a number of smaller but no less distinct regions. All of the regions that make up modern day Croatia have their own cultural and craft distinctiveness and so any attempt to introduce a craft subject that just talks of Croatia has to take this into consideration. However, an attempt will be made to introduce Croatian embroidery as a subject.

As in much of the Balkans, the Turkish influence on craft and design techniques is strong. As far as embroidery is concerned 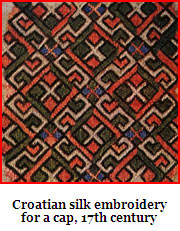 there are really three main influences on the Croatian craft as a whole, that of Turkish, Venetian and Slavic. The Turkish influence is strongest in the east, while Venice and Italy had the strongest influence in the west along the Adriatic coast. It can be said therefore, that the embroidery work produced in Slavonia in the east is the most Turkish in influence, while Dalmatia and Istria along the Adriatic coast has the most Venetian influence, while Croatia proper in the centre has the most obvious links with Slavic embroidery design work. Although this is not a necessarily strictly rigid explanation of the full influences on the different aspects and regions of Croatian embroidery, it does to some extent help to explain the regional variations.

In many respects, Croatia proper and Slavonia can be seen as having closer links culturally and craft-wise than perhaps Dalmatia and Istria. Therefore, it would be best if the Adriatic coastal area of Croatia was taken as a separate area in a future article, along with its relationship with Italy. 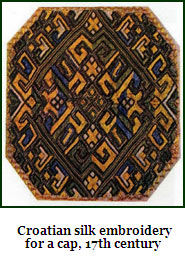 As far as Croatia and Slavonia are concerned, although the Turkish influence was strong particularly in the east, the indigenous Slavic culture was also strong. Red, used as an embroidery thread colour often on a white or neutral background was popular throughout the region just as it was in much of Slavic Europe including Russia. Design motifs and pattern work, despite being influenced by a range of different cultures from Byzantium to Turkey, still held some of the traditional formats that can be seen right across Eastern Europe and the Balkans.

Croatian women were proficient in most forms of textile crafts and skills including weaving, spinning, lace making and embroidery. Weaving was by far the most widespread and popular of the crafts and it has been said that the weaving skills base of Croatia was second only to that of the traditions of Sweden. Interestingly, often embroidery was incorporated into woven work while it was still attached to the loom.

All of the examples shown in this article are embroidered with silk threads and derive from both Croatia proper and Slavonia. They are all embroidered pieces used to decorate women's caps. These caps were status objects as they were used as a symbol of adult womanhood and were given after a wedding ceremony. They were then worn to denote a new stage in a woman's life. 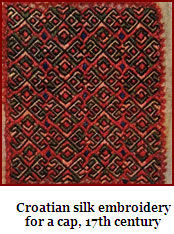 The pattern work in all the pieces does show a remarkable similarity to carpet design work particularly that of Turkish origin. It has to be remembered that much of the weaving that took place in Croatia and Slavonia during and after the period of the Turkish Empire, was that of carpet weaving. Even though Croatia proper was under Turkish occupation for much less time than other areas of the Balkans including Slavonia, it was always on the border of the Turkish Empire and would have been strongly influenced by the culture of carpet weaving that was widespread throughout the Balkans during the Turkish occupation.

As with all craft disciplines and particularly when concerned with the often complex patchwork of cultures and peoples that make up the Balkans, the subject of Croatian embroidery can only ever be an introduction. Future articles will take a much more detailed look at much smaller and distinctive areas and regions of both Croatia and the Balkans in general.

Originally published in The Textile Blog by John Hopper