Change is part of our lives today. And sometimes it affects our organizations. Unfortunately, we don't always react well to it either as individuals or in a group. But our survival as an organization frequently depends on our ability to react. We know this and yet we still resist change. 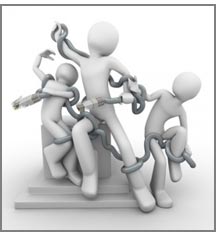 But what are the obstacles to change management?

There are many obstacles to change management. Many are unique to individual organizations. Many are unique to the individuals involved. This uniqueness is what forms the environment for change. The ability to recognize commonalities and work within this environment is crucial to success. In this article, I'm going to share six obstacles that are frequently found across many organizations.

Lack of education in managing the reaction to change: Even the term change management indicates that we don't properly teach managers how to manage their organizations through change. People's reactions to our change efforts follow a reasonably static set of responses. As managers, we need to be able to predict their reaction in order to identify the appropriate structure around the change.

People are slow to recognize change: People don't really resist change as a general rule. However, they often fail to recognize the extent or importance of change. This is actually a survival mechanism. And while it is in many ways a good thing, this delay can cause issues when surviving a change requires quick reaction times.

Complexity of the changes: It can be argued that our grandparents saw greater changes than we did or ever will. But what can't be argued is that the changes we are faced with are occurring faster and in more complex patterns than have ever occurred previously. The complexity of these changes makes the primary response difficult to identify. In addition, it can also make identifying the best way to manage reactions difficult.

Contradictory changes: Part of the problem involved with the complexity of the changes being dealt with is that many of the changes are in fact contradictory. For example, the emergence of the job board meant that job seekers could submit applications with less effort and greater control. However, it also meant that human resources became quickly overloaded, reducing the probability of a job seeker being selected.

Political environment: No discussion of the obstacles to change management could be complete with a mention of the political environment. While it's nice to believe that people accept change and resist change for rational reasons the truth is often different. Emotions form a large part of our decision making process. And that includes emotions related to protecting our turf, ourselves and our position. Many necessary changes have found themselves failing as unnecessary changes have found themselves forced into place due to improper political pressures.

Views expressed therein are the personal opinions of the author.

The author is an accomplished project management consultant, trainer and writer.