Home / Knowledge / Article / Industry / Apparel Sector of Botswana: will stimulus packages get the industry on its feet again?

Apparel Sector of Botswana: will stimulus packages get the industry on its feet again?

Botswana is a small landlocked country of Southern Africa. Textile and apparel sector of the country is a strategic industry. It is the largest employer in the manufacturing sector, employing more than 80% of women. Textile sector of the country generates low-skilled, youth oriented jobs providing livelihood for thousands of Botswana youth, especially women.

Textile and apparel industry of Botswana is the main beneficiary of the AGOA (African Growth and Opportunity Act). The sector has contributed immensely for the countrys foreign revenues. During 2000-2008, export earnings to the US rose in a drastic way. But currently, Botswana is witnessing a decline in its export figures. It is facing many challenges, and needs Government intervention. Foreign manufacturers are able to generate employment, while SMMEs face many hurdles.

Botswana apparel exporters have been quite successful in penetrating into the US and EU market. Apparels made reflect the dual existence of tradition, and modernization of the country. The industry has picked up from the earlier slack, whipping up positive changes and manufacture apparels for the younger section. Economy of the country is small, and private sector depends on Government spending. Opportunities for expansion in the export market do exist, but there are also a number of risks associated, that needs to be addressed. 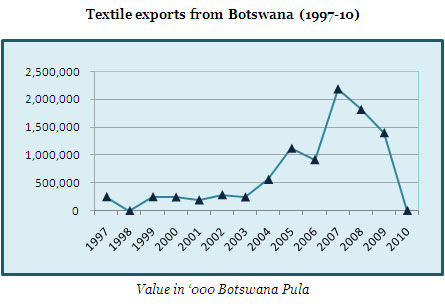 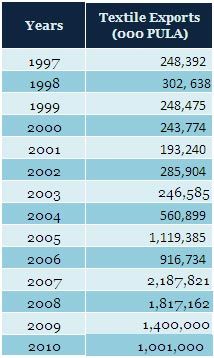 During 2000-08, textile and apparel exports contributed significantly to the countrys revenues. After 2008, textile exports declined sharply by 21.8%. Data from the Central Statistics Offices state that exports declined from BWP 1.4 billion in 2009 to BWP 1.1 billion in 2010. Simultaneously, imports saw an increasing trend of 13.3%; from 28.6 billion in 2009 to 32.9 billion in 2010. The local manufacturers fear that if there would be a recession, it would affect the purchase orders. As most of the manufacturers depend on small orders, they expect the Government to assist them to keep it going.

Botswana Government has earlier declared a stimulus package which was a two year programme. This was a rescue plan of BWP 38 million (Botswana Pula) planning to build more labor in the textile sector. During the economic downturn labor force of Botswana's textile sector was hit hard as many manufacturing units were shut down. Local textile manufacturers now expect the Government to extend the stimulus package, which is to end in December 2011.

The Botswana Gazette reports MacDonald Peloetletse, Executive Director of Marine Garments (Pty) Ltd, saying, "The industry has an intensive employment creation, if the stimulus package is extended it is bound to create more jobs as it grows. However, the government should study the challenges affecting the industry before re-considering the package".

Apparel sector in Botswana lacks skilled employees. People with specific skill sets such as work handling, quality management, operator training, supervisory training, and industrial engineering are lacking. Botswana is well positioned to take advantage of the cotton, and cotton yarn manufactured in its neighboring countries. If appropriate initiatives are taken to make optimum utilization of these raw materials, they can be effectively converted into textiles, and apparels.

Employment in the apparel sector of the country has the potential to grow. Textile and apparel sector is strongly positioned to involve in sustainable manufacturing, and grow further. The sector requires proactive participation from the Government in creating an investment climate to attract local and foreign investors.