Priorto the 1970s, it was not unusual for companies to dump garbage and chemicalsinto the ecosystem, or spew thick, black smoke into the blue skies, all in theinterest of manufacturing and economic progress.

How things weremade was not as important as producing them in the first place. That

"Corporatesocial responsibility" is the new buzzword, and major apparel companiesare embracing it. The only drawback? Most consumers do not see "green"as a key purchase driver, so "CSR" practices are not as wide-spreadas they perhaps could be. But long-term gains include financial returns, retailpacts and the maintenance of sustainable resources. If consumers helped drivethe message, more brands and retailers would be forced to hear the message.

For its part, Levi recently introduced eco-friendly WaterLess Jeans, which are made using significantly less water. The company says the average pair of jeans uses 42 liters of water in the finishing process. The WaterLess collection reduces the consumption by an average of 28% and up to 96% for some new products in the line. Water consumption was cut by combining multiple wet cycle processes into a single wet process; incorporating ozone 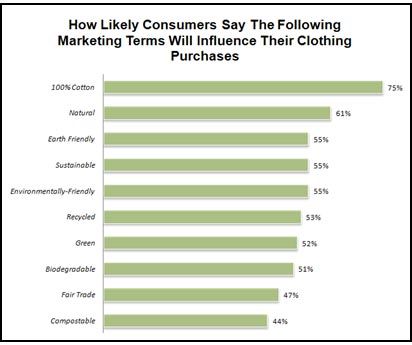 processing into the garment washing and removing the water from the stone-wash process. "We challenged ourselves to operate at the intersection of style and sustainability," Levi's Erik Joule, senior vice-president of merchandising and design, said at the time of the introduction. "We're excited about the results we've achieved so far, and we know we can make an even bigger impact by applying this innovative thinking to other aspects of our production process."

Yet these companies have their work cut out for them, since the Cotton Incorporated 2011 Environment Survey finds that less than half of all consumers (44%) say environmental friendliness is important to their apparel purchases, and most (76%) do not seek environmentally friendly apparel for themselves.

Furthermore, while 66% of consumers say they would be bothered if they found out an apparel item was not environmentally friendly, just 12% would take action, such as complain to the retailer or manufacturer, and 54% probably would do nothing.

Yet consumer interest is key, as Just-Style points out that pressure is necessary to persuade the fashion industry to take green issues more seriously. Their Green Report notes that "while there is a strong interest in green issues among fashion companies and retailers, the 'silent majority' of the industry has 'politely ignored' the demands of CSR."

Some companies have expressed a hesitation at embracing CSR, citing the cost. While the investment in sustainability may be costly at the outset, there are significant financial gains to be made in the long term.

Philip Kotler is the author of "Corporate Social Responsibility: Doing the Most Good for Your Company and Your Cause," and the S.C. Johnson & Son Distinguished Professor of Marketing at the Kellogg School of Management, Northwestern University. He says that as the environment worsens, companies will have to start investing in greener practices. "What might be a short-term cost can be turned into a long-term return to those companies who upgrade their green performance," Kotler notes, adding that corporate coercion may begin making a difference.

"Leading companies such as Proctor & Gamble and Walmart are requiring their suppliers to meet eco-friendly goals or be dropped," Kotler says. "This will require more suppliers to build a 'going-green' infrastructure into their organization. It is only a matter of time before most companies will have to embrace higher environmental standards."

Those companies that do adopt these greener practices, though, still must find ways to reach the consumer with messaging that matters most. The Environmental Study finds 70% of consumers are more influenced by 100% cotton claims than declarations of environmental friendliness. Seven of 10 consumers say "100% cotton" would influence their clothing purchase decisions, followed by "natural" (54%), "sustainable" (52%), and "environmentally friendly" (47%).

Some members of Congress would like to stop Environmental Protection Agency regulations of green house gases, which goes directly against the CSR principle. If that comes to pass, says Kotler, "Companies will differ considerably in how much they will install green practices. The role of EPA regulations is to make sure all of them go green. This eliminates the 'free riders' who let the 'good guys' bear all the cost."

Ultimately, between government regulation, consumer pressure and self-monitoring, corporations are bound to take their social responsibility quite seriously.