Traditionalrug and carpet design comes in a number of different styles within the confinesof the borders of modern day Romania. Regional variations used to be much moreacute than perhaps they are today, due to better transport, communication andgeneral interaction. The individual styles of various craft forms that werebuilt up over centuries across Europe, had much more to do with geographicalisolation than it did with any significant cultural purity, though this ofcourse cannot be ruled out. 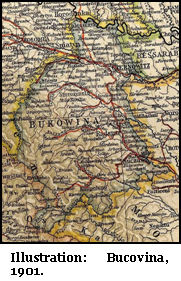 Therug work produced in the Romanian province of Moldova is unique within Romania as it is in Europe itself. However, within the province of Moldova itself, rug making can bedefined within various geographical areas with some having a distinct and longtradition of work that has a separate identity to that even of Moldova. Bucovina, a province of the old Austro-Hungarian Empire and now split fairlyevenly between Romania and Ukraine, is one of those areas. Southern Bucovinanow makes up an area of north-western Romanian Moldova and is famed for anumber of unique textile craft traditions including that of weaving. 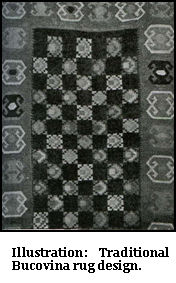 In the latter nineteenth century during the period of the Austro-Hungarian Empire, what was considered traditional peasant and folk art was collected avidly by both private and state individuals. Vienna

and Budapest, as well as most sizable cities throughout the empire had their own ethnographic libraries, museums and galleries where local traditional crafts, as well as those further a field were collected, documented and conserved. This practise went on all over Eastern Europe and despite the turbulent political history of the region over much of the twentieth century, many of the collections remain intact and in state hands. Most cities and indeed many towns throughout Eastern Europe have ethnographic museums, which are now an invaluable

storehouse of traditional crafts and skills, many of which are either no longer practised or have been drastically altered over the last century.

The rug work of Bucovina was as avidly collected as any other regional craft style, and examples can still be seen in various cities throughout the region. However, the best way of seeing Bucovina woven rug work is in Bucovina itself. The Ethnographical Museum at Radauti which is a town in the north of the region, has a full complement of traditional craft skill examples from ceramics to metal and wood and including costumes and woven carpets and rugs.

Rug weaving is still being produced in Bucovina, though mostly as a support to the tourist industry. Tours both craft orientated and general, often include visits to weaving workshops within their itinerary.

Originally published in The Textile Blog by John Hopper

By:
John Hopper
Published: Sep 2011
Reuse this Content
Our Clientele