From mines and factories to rural plantations and metropolitan cities, various forms of child labor are in practice. Which countries are more involved in this? What businesses include forced, or child labor more? What can be done to combat this malevolence?

ILO (International Labor Organization) estimates state that more than 215 million children work full time; globally. More than 50% of them are exposed to worst forms of labor such as slavery, hazardous environment, and other forms of forced labor. A latest list released by US labor department regarding the goods produced by child or forced labor under the Trafficking Victims Protection Reauthorization Act states an appalling fact that cotton, footwear and apparel makers top the list of worst offenders.

In 2005, the US Government came up with the Trafficking Victims Protection Reauthorization Act (TVPRA) to monitor and combat forced, and child labor in foreign countries. The first list was published in 2009, and was updated in 2010. 130 products from 71 countries were mentioned in the list. 17 cotton producing countries were included in the list which were involved into child or forced labor. Countries such as Argentina, Benin, Turkey, Turkmenistan, Paraguay, Pakistan, China, Egypt, Tajikistan, Zambia, and Uzbekistan were consistent in the list. 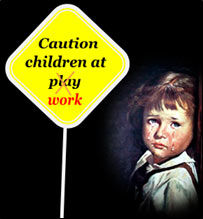 As per the list, countries such as Thailand, Malaysia, Jordan China, India, and Argentina were accused of violating labor standards in apparel manufacturing. The list further mentions Bangladesh, North Korea, and China for using child and forced labor in making textiles, and Nepal and India for using child labor in the production of embroidered textiles. India, Philippines, and Bangladesh are now top countries in the number of products made by child labor. Most of the times, the working environment in these countries is hazardous to the children's life and health.

Behind the glamorous gala of the apparel world, lies hidden, the dirty secret of child labor. While models and fashion savvy customers flaunt in alluring apparels thousands of children toil, working in dusty and cramped workshops. Child labors, apart from working in dangerous environment, receive very little pay, and the worst opportunity cost of their work, is their education. With the world suffering from the pangs of 2008 recession, and with the threat of a looming double dip recession, many households remain under poverty, forcing the parents to send their children to work, with the desperateness to make 'ends meet'.

Child workers as young as 10 years are working in garment factories, which manufacture clothes for the most renowned brands. Big brands usually subcontract their work, which ends up in a sweatshop employing kids in long working hours, unwaged work, and thrashings.

Efforts to restrict child labor must primarily focus on improving the economic condition, as it is the main cause of families sending their children to work. Ergonomic looms need to be introduced which will reduce the need for child labor. Apart from the initiatives taken by the Government, consumers should also demand the retailers to know how the garments are produced, and in what working conditions.