Can Yuan Graduate into an Investment Currency?

The US dollar had an unassailable position and had had a free run all along ever since it become the world's reserve currency, but the recent collapse of US Sub-prime mortgage market, a question of exploring other possibilities has cropped up. One effect of the crisis has been for many to prescribe Asia as a medicine for the ills of a world that has over- relied on the US as its engine of growth and manager of the dominant global currency. But, while it would be wrong to write off America anytime soon, it's plain to see that the biggest Asian nations have a key role to play in the future direction of the global economy. 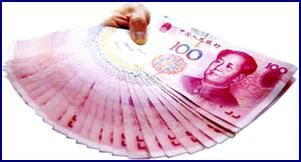 Chinese Yuan, of all other currencies, seems to make a reasonable claim to graduate into an investment currency as it seems to have better potential and acceptability. There are a number of reasons. At one point of time, Euro could be a viable alternative, but lately, the Euro itself seems to be floundering. It will take time for Euro to restore itself to the strong position that it enjoyed only sometime back. The European economy is also not in the pink of its health, though Euro still continues to be a strong currency and would continue to be so.

But then, when we are thinking of future, we may as well take into the account the projection of likely performance of various economies. According to the assessment of all international agencies and think tanks, the future belongs to Asia, where two largest economies have held out against the recession of 2008, when most of the economies were feeling heat of the meltdown. China and India stood out of this impasse. China's Yuan and Indian Rupee could be competing for the coveted position of developing at least as investment currencies.

China has already overtaken Germany as the world's largest exporter, it is increasingly engaging in global policy debates, through forums such as the G20, and HSBC predicts it will become the biggest economy in two decades. By 2050, India will be the third-largest economy, after exports increase more than six-fold; turbo-charged by deepening trade relationships within Asia and with other fast-growing emerging markets.

A key element of this reordering is the rise of an international Chinese Yuan that will become Asia's dollar used firstly in regional and global trade, then as an investment currency, and finally as a reserve currency. This evolution is already well underway, and that it has implications for India. There's no fixed definition of an international currency, but common features would be that it can be used in cross-border transactions and that non-residents can hold assets, liabilities and offshore tradable balances denominated in it.

China started the internationalization of Yuan in 2009 with a pilot programme that permitted use of the currency to settle trade conducted by some main-land Chinese regions, with Hong Kong, Macau and the ASEAN nations. We now expect China to settle more than half its business with emerging markets in Yuan by 20132015, representing the equivalent of $2 trillion of transactions and propelling the currency into the top three for global trade.

Increasing overseas use of the Yuan indicates it is already becoming an investment currency too. The offshore market for Yuan didn't exist a year ago, yet it now turns over an estimated $2 billion a day.

Hong Kong's so-called 'Dim Sum' bond market has enjoyed a similar trajectory, and we forecast sales to top RMB180 billion this year, representing a more than 10-fold increase against the 2008 levels.

Reaching the status of a reserve currency will take time. China will have to pass several milestones on the way - such as enabling full convertibility, and it will need to develop its domestic financial markets. There are many reasons why China would want to make the Yuan an international currency, including the potential for lower trade settlement costs, cheaper funding and increased financial influence commensurate with its growing political and economic stature on the international stage.

At the same time, the decision to internationalize a currency brings associated risks, such as higher vulnerability to external shocks because funds can flow more freely in and out of the country. It would mean less control over its currency.

But then, there is a major difficulty in China allowing that all freedom that goes with the investment currency and reserve currency.

For Indian businesses, readiness to do business in Renminbi will help build relationships with customers and suppliers in China, and eventually in other countries too. Wider acceptance of the currency may in time help lower trade transaction costs. A faster rate of Yuan appreciation could bolster Indian businesses' competitiveness, relative to its Chinese peers. For investors, the Yuan already presents an opportunity for wealth creation. In that, we forecast it will appreciate by an average 3-5% per annum over the next few years.

Of course, this doesn't mean that the Yuan is the only Asian currency with potential for internationalization. There are good arguments in favour of an international rupee, the most obvious of which is the strength of India's economy and its growing international importance. India should rebalance its economy towards external sources of growth over the medium term, and continue to liberalise the capital account, in part to help finance significant infrastructure investment needs.