The Jeans & Clothing Market in Russia

The clothing market in Russia is one of the most dynamic sectors of the economy. This is manifested in the form of frequent modifications in manufacturers' product range and continuing innovation in new products. The potential capacity of the Russian clothing market is estimated at $ 23-2.5 billion, increasing by 20-30% annually. Almost 90% of the apparel market is occupied by foreign producers. In general, Russian clothing market, by 65%, consists of low-cost imports from Asian countries, 20% of the market is Russian products and 15% -branded clothing by Russian and foreign companies.

The key features of the jeans market in the Russian Federation are:

In contrast to essential goods, clothing sector is one such group demand for which is determined by income, economic conditions and living standards. Consumer preferences and the choice of clothing depend on the age and sex structure of population, the level of human well-being and, marital status are also important factors. The younger population including children significantly cause to increase the demand and hence the higher prices of children's and teen clothing. In this sector however, a negative factor comes into play that the children and teen population continue to use these garments until they reach at a position of complete wear and tear which reduces the repeat orders. This sector of consumer of jeans consists of about 60% of the total volume of the market. 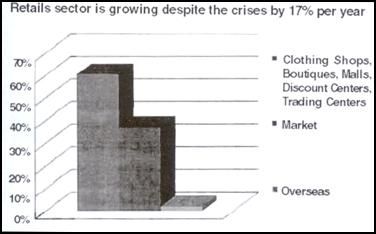 Nevertheless, consumers with higher incomes often replace their clothing, than consumers belonging to the low income segment. According to a survey, in the more affluent cities like Moscow and Saint Petersburg where reportedly 80% of population bought their last jeans only during the last year hence creating a higher demand than other regions.

Following are the main retail sales/distribution chains for finished textile goods including Jeans.