Retail profits can be increased in two ways. Either the sales can be increased, thereby increasing the profits, or the amount of losses or expenses can be restricted, which would also show higher profits. Retail shrinkage is a crucial area of concern for any retailer who wants to focus on the latter. Retail shrinkage arises when there is a variation in the value of stock as per the books and the actual stock available in the shop. The causes of retail shrinkage are mainly employee theft, shoplifting, administrative errors and vendor fraud.

Also known as commercial burglary, shoplifting indicates theft of goods from a retail store. One of the most common crimes, it is expressed as five-finger discount in Australia and US, and jacking, chaving, and nicking in UK. A market research survey on retail crime and loss indicates that possibilities exist, that one out of twelve customers; be a shoplifter. Professional shoplifters are known as boosters.

There is no typical profile for a shoplifter, making the spotting; complex. Shoplifters may be of any age, race, and background. While some signs like wearing heavy clothing even during warm weather, taking short; unnatural steps, and spending more time in watching the cashier or sales clerk may signal a red flag for retailers, there are no key aspects to identify them; point blank.

A hobby or a psychological disorder?

It is generally assumed that shoplifters have some mental disorder or they are in poverty, and need these things for their survival. On the contrary, a few people have kleptomania, and many others indulging in shoplifting would only be having adequate money to pay their bills. Most of the people involved in the activity are youngsters, and do it to get a rush. Some do it to get the attention of their friends. Few others do it, as a way to get back to a store, they have a grudge.

A survey conducted by global retail theft barometer covering 43 countries, and 1,187 retailers state that the cost of shrinkage during 2011 accounted to 6.6%; globally. Major items of shoplifting include apparels, grocery and jewellery. The study reveals India, Russia, and Morocco with highest risk rates, and identifies Japan, Taiwan, and Hong Kong as countries with low risk of shoplifters. 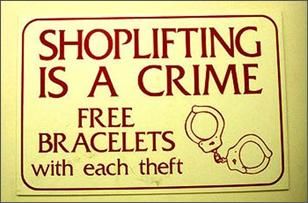 Most followed security measure to restrict shoplifting is employing security guards. CCTV cameras and EAS (Electronic article surveillance) systems trails closely. CCTV (Closed Circuit TV) filming all areas of the store is the most successful way to prevent shoplifting. Installation of physical obstacles such as alarm at the store exits, and closing the back exit of the shop would also prove beneficial. Shoplifters require privacy. Things should be arranged in such a way so as to avoid blind spots in the store, avoiding internal loss. Merchandise that is small in size and expensive should be kept behind the counter or locked in the display case.

RFID and other security products also play a vital role in combating retail shrinkage. RFID tags are used in tracing specific product information, even if they are kept in cars. These applications provide a host of services to retailers such as product tracking, supply chain security etc, in addition to the traditional services of smart card systems and others. It involves tags with electronic information, and works with an instrument called readers that capture the information and pass it on to the database.

Retailers need to create best practices matching their way of operations, and use them as a yard stick for improving chances to quash shoplifting. They should adopt multiple loss prevention strategies to avoid shoplifters from sliding merchandise into their pockets.