The world's second-largest apparel retailer Hennes & Mauritz (H&M), which usually enters large markets on its own, is not so sure about opening shop in India despite finding the market "interesting".

Earlier this month, India relaxed laws allowing foreign retailers to wholly own their businesses with the rider that they source 30% of their products from SMEs with revenues not exceeding Rs 5 crore. Until then, foreign investment was limited to 51% or retailers were forced to franchise.

But the Swedish retailer is not entirely convinced by the norms which make it mandatory for the foreign retailer to source from small and medium industries in India, a retail executive in India said.

"India is one of the many interesting markets for H&M, but we have yet to decide if, and in that case when, we would open stores there," Hacan Andersson, H&M's press officer said. He, however, did not comment on the new sourcing norms.

The Stockholm-headquartered chain operates around 2, 500 stores across 43 countries posting revenues of 128.8 billion kronor (around $19 billion). Another Swedish giant Ikea, which too was keen on entering the Indian market with 100% control of operations, has been non-committal. It is still studying the guidelines -- the SME sourcing being a contentious issue.

"If a supplier can meet the sort of volumes required by a global retailer the size of H&M, it will not be defined an SME," Amit Bagaria, chairman of retail planning consultancy Asipac Projects, says.

"The opening up of the market has not really moved the needle for foreign retailer interest so far," Raghav Gupta, principal at management consulting firm Booz &, says. The government, on its part, introduced the local sourcing norm to expand domestic manufacturing.

"It's a deal breaker. Clearly, the government didn't think through this policy," said another retail consultant on condition of anonymity, who is negotiating with a couple of overseas brands to facilitate their India entry.

Experts say it is not a tall order for multi-billion dollar global retailers to source as much as 30% of their India sales from domestic manufacturers. H&M, for instance, already sources finished goods from the around Rs 2,200-crore Bombay Rayon and Rs 1,100-crore Gokaldas Exports. 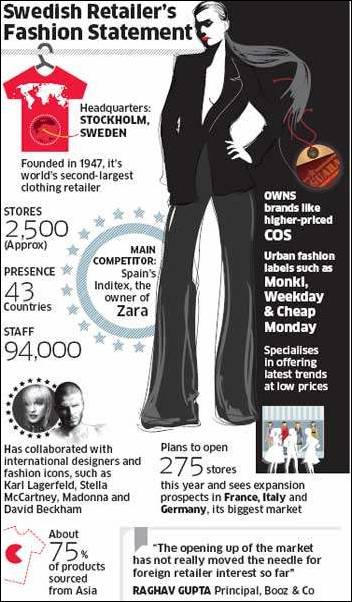 But it's the size of manufacturers they are now expected to work with that has caught foreign retailers in a bind. SMEs are defined as those whose initial investment in plant and machinery is between Rs 25 lakh and Rs 5 crore.

H&M is known to have sourced nearly a crore shirts from a single Indian exporter last year, the sort of volumes an SME would be unable to handle. As soon as a supplier invests more than Rs 5 crore to meet higher volumes, it ceases to be an SME.

On the other hand, working with numerous small and micro industries is unlikely to be favored either because the retailer will not be able to ensure uniform quality standards, analysts say.

But some believe that H&M could still accommodate India without altering its global sourcing strategy. "It could source high-fashion products or those that require hand embroidery from SMEs in small volumes and sell it at a premium in its international flagship stores," Promodh Sharma, chairman of Fifth Avenue, said. Fifth Avenue is a $100-million sourcing Management Company headquartered in Chennai.

"Global brands are also now looking at sourcing in India for the Indian market as it would make economic sense in the long run," Sharma adds.

By entering India, Ikea would immediately gain as it meets a need gap in the home accessories and furniture market as no Indian player has the breadth of their merchandise. H&M, on the other hand, would have to compete with international fashion brands in India such as Tommy Hilfiger, Esprit and Spanish brands Zara, and Mango.

All three are fast-fashion brands or those known to turn around catwalk trends at affordable prices by refreshing styles routinely. While Inditex entered a JV with Tata Group's retail division Trent, Forever 21 is being franchised by Hello Retail India.

India's growing economy, when compared to Europe and North America, is the biggest draw for foreign retailers. Nearly 20 foreign fashion brands have being launched annually since 2005, according to management consultancy Third Eyesight.

Economic uncertainty in a number of markets has had a negative effect on consumption resulting in fiercer competition for consumer spending, H&M said in its latest full-year report. However, foreign retailers will not look at India just as a short-term fix.

While some say H&M would do well to not postpone Indian plans, others such as Booz's Gupta say sportswear makers and denim giants have reaped handsome returns from India, but western womenswear market is still not as big, ad H&M is largely a womenswear retailer.

"I will not be surprised if some foreign fashion brands wait another 3-5 years before entering the market," Gupta adds.

In fact, unlike Chinese women, Indian women are still in the process of switching from ethnic to western womenswear. "Which Indian city can take 9 Zara stores?" asks Bagaria, "Not even Mumbai or New Delhi." But Zara has 9 stores in Beijing.