The hand lace making industry of East Devon was traditionally said to have started with the influx of Flemish refugees in the sixteenth century, although certain forms of embroidery and cut work in particular which is often seen as the forerunner to the lace craft, were produced before this time. Although analogies with earlier designs produced in East Devon do correspond to lace work produced in Belgium, it is difficult to be fully accurate. The nature of the lace industry was one of often borrowing and adapting patterns from different areas and incorporating them into native or domestic styles, which makes it difficult to pinpoint indigenous styles and geographically localised areas of production. 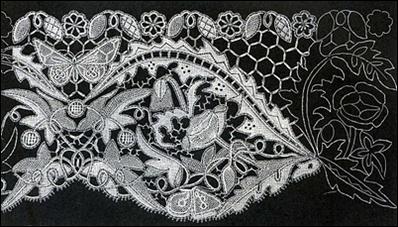 One thing that is certain is that East Devon produced fine lace work that was created in numerous villages in the East Devon area for a number of generations. The reason that it is often given the general title of Honiton, rather than the specific village of production, is the fact that Honiton being the main town in the area was where the finished lace was brought together for shipment via stagecoach and then later by train to London in particular.

There is a definite style to Honiton lace, which commonly used floral work that was often motif based and could consist of relatively large gestures. The flower motif would be worked separately and then integrated into a piece of lace work via the background netting. Motifs were often strung together through the netting background and could therefore be used, depending on the scale, for anything from the edging of a tablecloth to that of a small handkerchief. This intriguing design work may appear more robust perhaps than some of the finer examples from different areas of Europe; however, the work does tie in with the ongoing English use of a relatively unstylised form of nature, which was so much a part of the general pattern style of the culture. 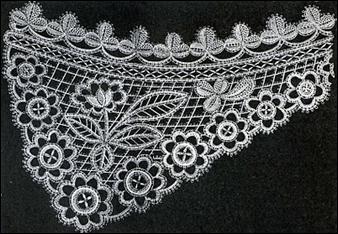 Some of the work produced during the early to mid-nineteenth century copied some of the floral wallpapers that were so popular at the time. This could help to explain some of the larger examples of floral motifs, although by all accounts many were less than successful as judged by critics and the lace makers themselves. There is a certain similarity with English embroidery work, particularly of the sixteenth and seventeenth century. This may well be either a coincidence or perhaps an example of designers from different genres tapping into the same font of initial inspiration, the vocabulary of English design work perhaps.

Either way Honiton lace despite its inevitable European links was altogether a domestically inspired craft that produced work that was both admired and copied outside of the geographical area of East Devon. So much so that to some extent at least Honiton is sometimes referred to as a style rather than a geographical moniker. Making the scene even more complex is the fact that Honiton lace makers, like so many others in Europe, also produced work in other European styles, as the fashion demanded, so that lace work could appear as both the fashionable lace style of the day and yet still be classed as Honiton. 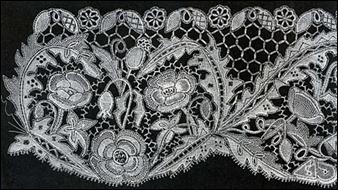 Honiton lace, like so many other hand lace producing areas of Europe, is no longer a viable industry. The twentieth century was particularly unkind to the craft, when fashion, for both costume and interior, minimalised its use of external fringes and borders. Because the industry was literally at the mercy of the dictates of fashion it found it near impossible to either diversify or adapt. The Royal families have felt compelled through most of the nineteenth and into the twentieth century, to commission lace work, be it on a fairly small scale, from the various traditional lace centres of Britain and Ireland.

Queen Victoria was a fairly substantial commissioner of lace work, and Honiton lace was incorporated into the wedding dress of Princess Diana. 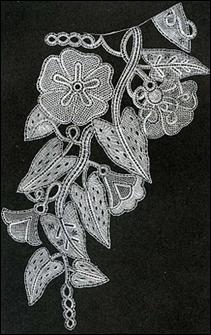 Honiton still sells locally produced lace today, although mostly of an antique nature, and is a good place to buy or explore this uniquely English lace craft, as well as find tools to experience the craft yourself.

Originally Published in The Textile Blog