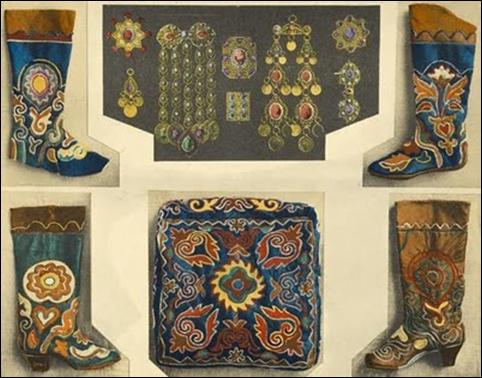 In 1925 the then Soviet Union held, amongst its various exhibitions at the Exposition Internationale des Arts Decoratifs et Industriels Modernes in Paris, a large display that highlighted the ethnic diversity of the Union as seen through various traditional craft skills. Amongst these displays was some Tatar leatherwork. The catalogue produced for the exhibition highlighted one page dedicated to the Tatar craft skill of leatherwork. The example shown here was merely named Tartar, but we can probably be certain enough to say that the items originated with the Volga Tatars of Kazan.

As well as there being Siberian, Crimean and Volga Tatars, there are also sizeable minorities of Tatars within Central Asia, the Baltic States, the Caucasus, Eastern Europe and across the Russian Federation. The total Tatar world population is presently thought to be about ten million. This broad and extensive Tatar homeland says much about the history of the Tatar people and particularly their links with their early nomadic lifestyle. 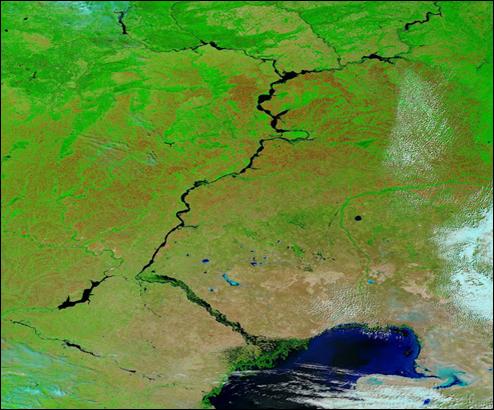 Leatherwork was often an important component of nomadic or semi-nomadic peoples and Volga Tatars were no different. They were extremely proficient at all levels of the craft from processing the hides to detailed cutting, dying and applique work. Whether the Tatar penchant for leatherwork really has anything to do with their nomadic past is uncertain. However, what is certain is that Volga Tatars were well known across Russia for their craft skills including ceramics, metalwork, jewellery and leatherwork. Tatars of the region were also great traders with the Volga being a great natural trade route. This helped to spread their leatherwork goods and reputation well beyond their own communities.

The decorative design on the leatherwork shown in this illustration has definite links with other Tatar groups in Europe and Asia and shows significant similarities to decorative pattern work that stretches back into Asia as far as Mongolia. Therefore, although the work shown may well have derived from Kazan, the larger Tartar community that stretches across two continents should also be considered as the greater origin of the decorative leatherwork that was shown by the Soviets at the 1925 Paris exhibition.

Although Tatars are still scattered across a large geographical area and many find themselves ethnic minorities within various states and nations, the Republic of Tartarstan now within the boundaries of the Russian Federation, with its capital at Kazan, is a central focus of the Tatar culture, crafts and lifestyle.

Illustration: Official flag of the Republic of Tatarstan.

There are a number of online sites dealing with different aspects of Tatar culture and crafts, some of which are listed below in the Further reading links section, along with a list of relevant book titles.

Originally published in The Textile Blog.