First it was shuttle looms, then shuttle less looms which too evolved over the years from gripper to rapier to water jet to air jet to complete the process of weaving fabrics by interlacing yarns/threads lengthwise and width wise commonly known as warp and weft in a regular order.

In the air jet loom, a jet of air is projected across the shed forcefully, that takes the filling yarn to the other side i.e. a jet of air is used to propel the weft yarn through the shed at speeds of up to 600 ppm. To make fabrics on this latest type of looms available in the marketplace today, one needs to use uniform weft yarns. Though heavier yarns are suitable for air jet looms, lighter yarns are very difficult to control through the shed. It has also been noticed that two heavy yarns also can't be carried across the loom by air jet. Despite these limitations, air jet loom can produce a wide variety of fabrics.

A device 'Maglev System' when attached to an air jet loom can do wonders and can help overcome limitations. 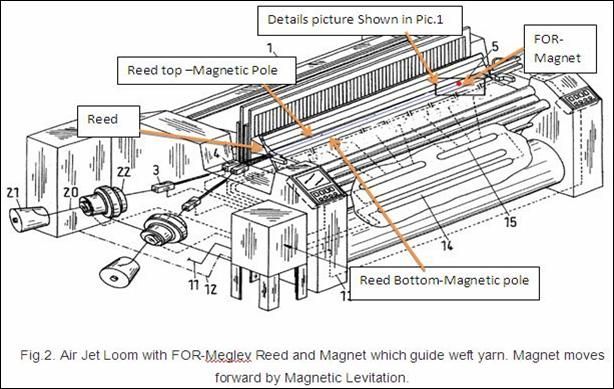 Explaining the Maglev System, which is can be called FOR-Maglev System for Weft Insertion, it is said that FOR-Maglev weft insertion is a transport system of weft yarn guided by magnet that uses magnetic levitation to suspend, guide and propel weft yarn rather than using air through airjet. In fact, FOR- Maglev insertion is a means of flying magnet carrying weft yarn along a guide way of dent by using magnetic force to create both lift and thrust. The power that is needed for levitation is not in particular a large percentage of the overall energy consumption; most of the used power is needed to overcome air resistance (drag), as with any other high-speed form of insertion.

Once we replace airjet system in the Loom with FOR-Maglev system, there is no need of air for weft insertion, which in turn, saves substantial amount as there is no need of compressed air which is costlier source of energy. Even this device can be applied to other shuttle or shuttle less looms that work with the aid of shuttle, projectile or water. Further, with the use of this system it is possible to feed weft yarn from both sides.

The meaning of Levitation is to raise or float against the gravitational force. So, Magnetic Levitation is understood as a raise made using magnets or magnetic field.

The basic concept of magnetism i.e. like poles repel and unlike poles attract, is the basic principle of Maglev. The electric current supplied to the coils in guide way walls is constantly alternating to change the polarity of the magnetized coil. This change in polarity is used to pull the FOR-Magnet forward and push from backside. 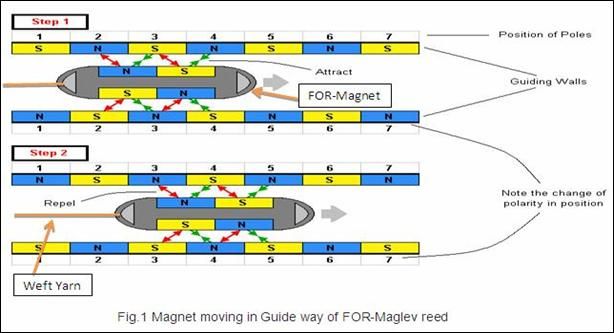 Step 2: While moving forward if the pole does not change, then it will push the FOR-magnet backward and there will be no motion experienced. So, at step 2 the polarity of the coils in the guided walls changes. By doing so the FOR-magnet is again pushed forward making a complete motion. 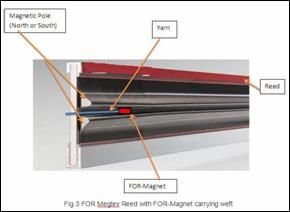 As shown in fig.1, FOR-Magnet will move in Guide way in-between magnetic pole along with weft yarn. Moving of magnet will start when reed moving back till moving forward. This will give more time of traveling compare to air blowing for weft insertion. FOR-Magnet will be move due to magnetic levitation in between two magnetic pole generated due to electrical current.