Lace making in Limerick is traditionally associated with the potato famine years of the late 1840s, even though it was introduced to Limerick a decade or more before the famine. However, it was during the famine years that a number of attempts were made to widen the traditional Irish dependence on agriculture and potato crops in particular. A number of craft initiatives were introduced, lace being amongst them. Although lace production did tend to be limited to the female population, a number of regions of Ireland did become associated, if somewhat briefly, with a relatively high standard of lace hand production.

Much of the lace design work produced in Ireland in the mid-nineteenth century onwards tended to be copied more or less directly from examples found in Europe, particularly those produced in Belgium. It has to be said that not all of the Irish lace was hand produced, as machine lace was often included in at least part of the process. Limerick lace in particular often used industrially manufactured lace netting on which workers then produced hand lace patterns. It was this unhappy combination that some critics saw as a compromise too far for the lace craft industry, even though Limerick lace did see a relatively stable production during at least part of the latter half of the nineteenth century.

A more damning criticism of Irish lace in general was the perceived lack of indigenous dynamic design and pattern work in which to feed the craft industry. It appeared to many critics that the industry was far too dependent on the traditions and fashions of Europe rather than that of their native Ireland. It was this criticism in particular that was addressed from about the 1880s onwards when a new revitalised Ireland began to take decorative and craft decisions that were Irish based rather than those imposed from England, Scotland, or indeed Europe in general.

From this period onwards, there was a concerted effort to encourage design students in educational establishments across Ireland to design work for native industries particularly those associated with textiles. There were a number of regular competitions and exhibitions which were encouraged so as to set a productive and fruitful environment for Irish crafts of which lace pattern work was a significantly large proportion. The 1883 exhibition in Cork for example, set aside a specific area for Irish lace. A number of the older lace making areas of Ireland were restructured and refurnished, much more on the lines of the Arts & Crafts movement. Limerick, which had seen production dwindle to a near nothing, was restructured in the 1880s. Former lace workers were sought out, production was reintroduced and connections were made with a range of London retail outlets. 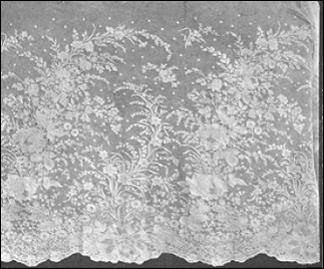 It is interesting to note the number of Irish entries by college students regarding the regular competitions set up by such magazines as The Studio. Lace designing competitions in particular saw entries by both male and female students that covered the whole island from Belfast to Cork and from Limerick to Dublin. Many reached high levels and the standard was always extremely high and professional. However, it is unfortunate that many of these competition entries did not produce actual lace work as the industry was already becoming less significant the nearer Ireland came to the twentieth century.

Lace craft has seen a devastating effect on its fortunes in the twentieth century and in the twenty first much of the lace craft industry that remains is little more than a tourist trade. There is still a certain amount of lace production left in Ireland, though little in Limerick itself.

However, the name does survive, as do many examples from the initial period of the mid-nineteenth century onwards. Irish lace, although occupying a relatively short historical period compared to some other areas of Europe, did make an impact and can be seen as an important element in the history of European lace production.

Originally Published in The Textile Blog.