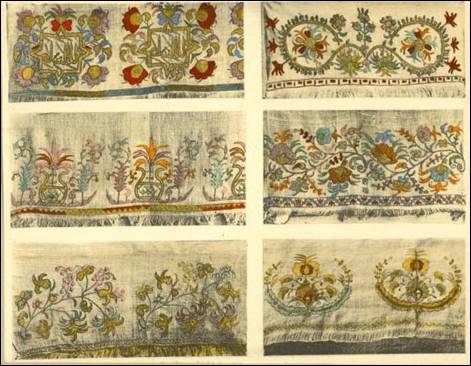 The history of embroidery in the Crimea goes back to the days of the Crimean Khanate, where much of the professional embroidery output was destined for the Khan's court. Skilful embroiderers were highly prized and were well looked after by the state. They supplied any number of complex and labour intensive pieces that would be displayed at court and would help to impress outsiders as to the wealth and sophistication of the Khanate.

Embroidery was not only limited to the Khans court as most girls of the Khanate were expected to learn the skill from an early age. Women would supply embroidery for domestic and costume use and each family would build up supplies of embroidery pieces that were kept separately in order to be used for dowry purposes.

Weddings themselves were feasts of embroidery with both the bride and groom wearing prodigious amounts of hand produced embroidery, as well as the home of the bride being festooned with embroidered items including wall hangings that gave the air of festivity to any domestic interior.

It is probably not an exaggeration to say that nearly every aspect of the daily life of the people of the Crimea was affected by the use of embroidery. It would have been both a part of every day life, but would also mark the special occasions and festivals in their lives.

When the Russians took control of the Crimea, the professional embroiderer's guilds, which had always been tied to the success of the old Khans court, were disbanded when the court was abolished. However, embroidery did continue to be produced, but on an amateur level by women in the home. 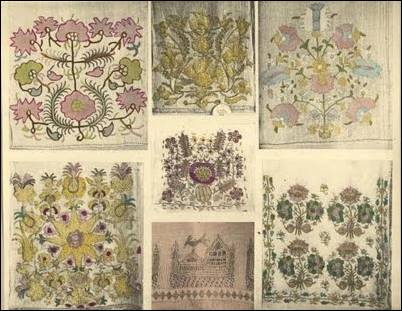 In the late nineteenth and early twentieth century Russians started building up extensive collections of traditional arts & crafts from across the Russian Empire, and Crimean embroidery became an important element in any serious collection. Many middle class and aristocratic households had at least some element of Crimean embroidery in their homes.

After the revolution, many of the collections fell into state hands and were used as tools to promote the Soviet Union. A collection of embroidery was even shown at the 1925 International Exhibition of Modern Decorative and Industrial Arts in Paris, of which these three illustrations of Crimean embroidery are part.

Under the early Soviet government, embroidery in the Crimea started to develop as an educational subject. However, there were always problems with lack of funding and sufficient trained staff, and colleges and courses would appear and disappear with alarming frequency. Despite this, Crimean embroidery helped by a number of dedicated individuals, maintained a relatively high profile for the craft and examples were to be seen in most of the Soviet exhibitions held during the 1920s and 1930s.

The Second World War spelt disaster for the Crimea when in 1944 Stalin expelled all Crimean Tatars, most only had fifteen minutes to collect their belongings. Naturally, many took embroidery heirlooms with them. A large proportion of the population ended up living in Central Asia. Only recently have they begun to return home and the skills maintained by a few of the older generation of women are now being passed down to younger generations in order to rebuild some of the prestigious cultural heritage that was part of the Crimea. 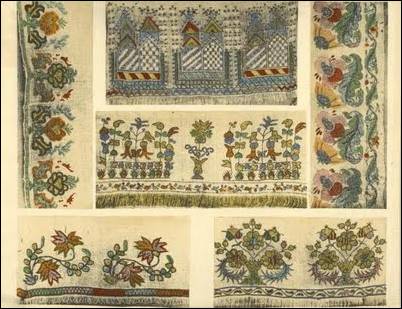 There are a number of organizations within the Crimea and the larger Ukraine, that are dedicated in helping the Crimean Tatars to piece together as much of their culture as is possible under the circumstances, and all credit should go to these organizations and the people that fuel them.