Discharge printing is a method where the pattern is produced by the chemical destruction of the original dye in the printed areas. The discharging agents used can be oxidizing or reducing agents, acids, alkalis and various salts. But, most important methods of discharging are based sulphoxylates formaldehyde & Thiourea dioxide.

Recently, the environmental and industrial safety conditions increased the potential for use of enzymes in textile processing to ensure eco-friendly production. In Discharge printing, Sulphoxylate Formaldehyde (NaHS02.CH2o.2H20) is one of the powerful discharging agent used commercially, however, it is considerably toxic and evolves formaldehyde known as a human carcinogenic associated with nasal sinus cancer and nasopharyngeal cancer. 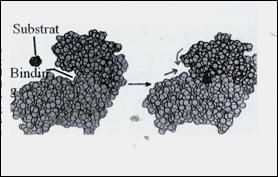 In this article we have discussed about replacement of this hazardous chemical with eco- friendly enzymes in textile discharge printing. Enzymatic discharging printing carried out with Phenol oxidizing enzyme such as Peroxidase with hydrogen peroxide by selectively discharged reactive dyes from the cotton fabric at selected areas creating a printed surface.

Textile discharging printing is the most versatile and important of the methods used for introducing design to textile fabrics. Considered analytically it is a process of bringing together a design idea, one or more colorants, and a textile fabric, using a technique for applying the colorants with some precision.

Biotechnology has dramatically increased the scope for application of enzyme systems in all areas of textile processing. Enzymes can be tailored to implement specific reactions, such as decomposition, oxidation and synthesis, for a variety of purposes. There is a growing recognition that enzymes can be used in many remediation processes to target specific purpose in textile industry. In this direction, recent biotechnological advances have allowed the production of cheaper and more readily available enzymes through better isolation and purification procedures.

The enzymes are used in textile industry because it operates under mild conditions of temperature and pH, it replaces non-selective harsh chemicals. A Bleaching enzyme such as Peroxidases together with hydrogen peroxide is capable of oxidizing organic compounds containing phenolic groups.

Enzymes are specific that is, they control only one particular chemical change or type of change, quotes New Junior Encyclopedia.

Intermediate transition state is formed between a substrate and an enzyme accelerating the conversion of a substrate into a product Enzyme modification of dyes in the process to destroy chromophores and reduce toxicity.

Horseradish peroxidase is a protein with a molecular weight of about 40,000 which contains a single protoporphyrin IX hemegroup. This enzyme catalyzes the oxidation of a variety of substrates by hydrogen peroxide. In this present work aimed at using Horseradish peroxidase enzyme instead of toxic reducing agent to create discharge style on cotton fabric dyed with vinyl sulphone reactive dyes.

The enzyme horseradish peroxidase (HRP), found in horseradish, is used extensively in biochemistry applications primarily for its ability to amplify a weak signal and increase detect ability of a target molecule.

HRP contains two different types of metal centre, iron (111) protoporphyrin IX (usually referred to as the 'heme group') and two calcium atoms. Both are essential for the structural and functional integrity of the enzyme. The heme group is attached to the enzyme at the proximal histidine residue by a coordinate bond between the histidine side-chain atom and the heme iron atom. The second axial coordination site is unoccupied in the resting state of the enzyme but available to hydrogen peroxide during enzyme turnover.

Most reactions catalysed by HRP C and other horseradish peroxidase iso enzymes can be expressed by the following equation, in which AH2 and AH* represent a reducing substrate and its radical product, respectively. Typical reducing substrates include aromatic phenols, phenolic acids, indoles, amines and sulfonates.

Important features of catalytic cycle can illustrate in below figure with ferulic acid as reducing substrate. The generation of radical species in the two one - electron reduction steps can result in a complex profile of a reaction products, including dimmers, trimers and higher oligomers that may themselves act as reducing substrate in subsequent turnovers. 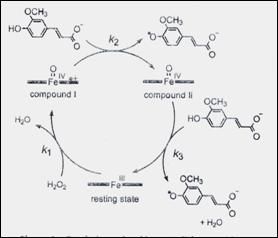 The first step in the catalytic cycle is the reaction between H202 and the Fe (III) resting state of the enzyme to generate compound I, a high oxidation state intermediate comprising an Fe (IV) oxoferryl center and porphyrin based cat ion radical. In formal terms, compound I is two oxidizing equivalents above resting state.

Application of Enzymes in Discharging Printing

Bio-technology & enzyme application is inevitable tool in modern industry where environmental aspect plays critical role to sustain in the competitive market. Innovative method of using Horseradish Peroxidase & H202 formulation in discharge printing of textiles can carry out successfully with replacement of toxic discharging agent. Formaldehyde liberation can be fully avoided in this kind of Bio- discharge printing.