What is the market for this small piece of clothing; ideally considered as women's second skin?

Originally as in its French roots, lingerie holds a significant identity as women's attire.

Though more associated as women's intimate apparel, lingerie is categorized as a term for undergarments for both sexes. Women have worn everything as intimate wear. Starting from a whalebone contraption with pulleys, to near nothing light and silky clothing, lingerie has evolved through various phases to reach the place; as it is. The concept of lingerie as a visually appealing apparel developed later during the nineteenth century. Since then, the industry witnessed enormous growth, owing to female infatuation for innerwear fashion.

Global lingerie market is estimated to be around $29.23 billion USD in 2012. Considered as a historically resilient sector by industry analysts, the industry has witnessed good growth rate even during recessionary pressures. With a positive growth rate over the coming years, market for intimate wear is expected to reach $30 billion by 2017. Much of the market potential for the product lies in Western Europe and North America comprising 65% of the global lingerie market.

During 2012, more than one fourth of the global lingerie sales were made in EU-27. US, Russia, and China trailed closely. In Europe, France is regarded to generate more revenue in the sales of intimate apparel. More than two thirds of the British online retailers reported a drastic increase in their sales figures during 2011. 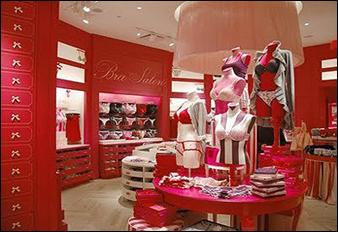 Asian countries like India and China are potential markets attracting international brands. In Asian countries merchandise can be sold in more quantities at cheaper prices. Sale of intimate wear in Japan totaled up to 5 billion during 2010. North America is predicted to grow by 4.2%, Japan & South Korea by 1.9%, and Europe & Turkey markets are anticipated to be without a change. The rest of the market is predicted by grow by 14.8%. Emerging markets, particularly the BRIC (Brazil, Russia, India & China) countries are expected to lift the industry.

The primary marketing issue in the lingerie market is the clash between international brands, and the retailer's own private labels. Both are obviously concerned to discover the emotional wants and choice of their consumers. Private labels are sold 60% - 80% cheaper comparatively over branded lingerie, and constitute a major portion of the total clothing sold; worldwide. 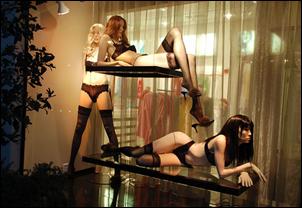 Lingerie's fashion appeal has remained evergreen and has undergone drastic changes during the past years. Market is driven by brands that come up with innovative products with new fabrics, embellishments, and creative patterns. Big brands such as Calvin Klein, Lejaby, Rosy, Lise Carmel, and Victoria's Secrets dominate the international lingerie market.

Market is also dominated by manufacturers who sell their brands directly to consumers. HanesBrands saw revenue of 4 billion during 2011, surpassing brands such as Etam, and Wacoal. Victoria's Secrets has opened its own store, and is chalking plans for more. Brand Baci is planning foray into foreign markets such as Brazil, Spain, Latvia, Estonia, and UAE. Chantelle, Lindex, Truimph, and Wolford are also making a beeline.

Women's lingerie is indeed the most alluring attire gaining attention of seasoned designers. Many women buy them because they prefer the style, or because it fits with certain style of clothes. This stylish and appealing piece of clothing is designed to be visually attractive and titillating. "Show it off" is the market philosophy of today, and designers herald the same by offering versatile lingerie designs that categorize it as a fashion accomplice. Luxurious lacy bits, satin pieces, enticing teddies, and skimpy thongs adorn store racks. Straps and lace trims are deliberately layered and exposed as a slice of the outerwear. Sales of intimate wear make it crystal clear that consumers buy clothes not as a necessity, but as a preference.