This paper summarizes the application of natural dyes in fabric and analyzes the property of the dye in the material. Our cloth is producing pathogenic odour, bacteria, fungi and moulds. They include a variety of microorganisms like bacteria, algae, fungi and virus. Microbes require certain conditions to grow including dirt, perspiration, warm environment moisture and a receipting surface like skin or fabrics. Textiles are carriers of microorganisms such as pathogenic bacteria, odour generating bacterial, mould and fungi Annatto is a natural carotenoid obtained from Bixa orellana shrub. In Recent Years, the seeds are gaining economical importance as a highly desirable colorant. The ripe fruits of annatto on drying yield annatto seed which serves as the raw material for the production of annatto colour. The coloring matter is collected from the outer part of the seed. Annatto dye is non toxic and is mainly used for coloring edible products. It is used for only the purpose of coloring edible items like butter, ghee, chocolates. Annatto is also used as an ingredients in medicine to cure fevers, dysentery and kidney diseases. Now, it is mostly used to colour the medicine like tablets and capsule. And it is used to produce ointments for curing wounds. In India, it used as an insect repellant. 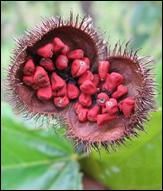 Nowadays the environment aspects of effluent treatment are too complicated problems in processing industries. So due to overcome this problem, now a days eco-friendly process is required. If we used the natural coloring matters with eco friendly process, there is no need of effluent treatment. Natural dyes are eco-friendly to the environment. All natural dyes are not having good fixation to material. So some dyes require mordant for fixation. In this project, I chosen annatto for a colouring matter and will also analyze the antimicrobial property.

It is a natural dye obtained from annatto tree. Annatto possess good substantive towards cotton material and give orange colour. If we use mordant means there is a chance of getting colour from light orange to orange red. It gives pleasant odor to textile material. Natural herbal products can be used for antimicrobial composition to be the effective candidates in bringing out herbal textiles. The plants and plant products are traditionally used for healing of wounds, burn-injuries and antimicrobial activity against skin infections. Several medicinal plants are used for years in treating many diseases in daily life. Plants are reliable source of potentially important bioactive natural products. The growing interest in herbs and economically useful plant is part of the movement towards green economical life style.

Annatto extracts can be found in many forms. It may be a power, paste, oil or as a chunk. It can also be used in food for culinary enhancements and flavoring. The procedure to make any of them is a little time taking as well as tedious. If annatto seeds are being used as it is, it is not really tough. The seeds have a coating of an oily paste that coating bixin. Bixin is a yellow orange carotenoid. It is extracted using aqueous alkaline solution and vegetable oil solvent.

Vegetable oil solvent gives oil soluble bixin; alkaline solution gives water soluble norbixin and propylene glycol yields a combination. For powder form, annatto seeds need to be dried and cursed to extract the powder. Deriving the paste form needs addition of water, vinegar and other herbs too at times. Annatto oil is available in flavored as well as unflavored form. It needs putting a little bit of edible oil in annatto seeds. It is basically reddish orange colored oil. Annatto oil is quite popular primarily in South America and it is used for cooking in a number of cuisines. 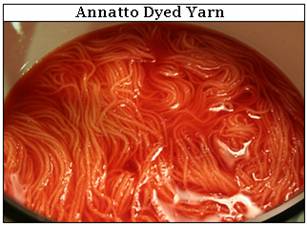 As a Food Coloring

Cotton fabric is used for applying the annatto dyes .The cotton fabric is soft fluffy stable fiber, so the fabric when it placed on the surface of the skin our body gets feel cool, relaxation, and feel so breathe freely.

Novel technologies in antimicrobial finishing are successfully employed in non-woven sector especially in medical the bioactive fibers includes sanitary materials, surgical threads, dressing materials and materials for filtration of gases and liquids, air conditioning and ventilation, and special materials for food industry also. The Ultimate goal of this research is to create a colour to the fabric and that will kill microbes but maintain all necessary textile properties including durability and comfort properties.