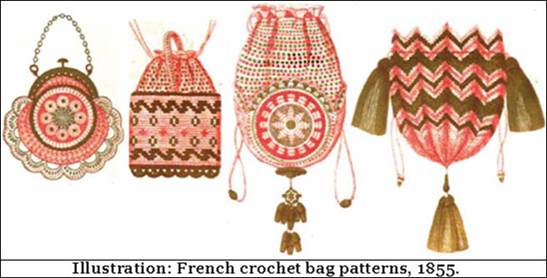 Not everything concerned with textiles, whether hand or machine produced, is necessarily always grand, open and public, sometimes it can also apply to the small, personal and intimate. Crochet in particular tends to have the ability to both apply itself to an individual, and perhaps more importantly, be associated by many with being intrinsically personal in both adornment and intimate domestic settings.

Crochet as a craft has run through the highs and lows of social fashion across the nineteenth and twentieth centuries, and seeing something of yet another revival in our own twenty-first. The nineteenth century saw it invade both costume and the domestic interior, being used for practically every eventuality. Within costume the little personal purse or bag was an ideal crochet project. Although by no means all personal purses and bags were crochet based, many were and descriptions abounded in all of the major women's magazines of the period either giving selections of styles, or detailed patterns for construction.

The examples that illustrate this article, all ranging from a small period in the latter half of the 1850s, give a good impression of how wide-ranging the fashion styles were and therefore how unique these personal adornments could become. Many were too small to carry much bar a few coins and personal mementoes or small toiletries, but then they were not really meant for practical necessity but more a case of textile embellishment, which they did, often in great style.

These purses and personal bags ranged across the Victorian world and could be found across Europe and North America, as too could the pattern work. There seems to have been little regional variation, with the French styling of the first illustration for example, appearing to be just as appealing in Chicago as it was in Edinburgh. The nineteenth century was to see the internationalizing of consumption on a massive scale. For the first time consumers in North America and Europe were able to pursue fashion, if not simultaneously, then at least with only a small modicum of delay. The expansion of relatively cheap magazine titles helped to fuel this expectation and as the century progressed the magazine market matured giving rise to titles that filled niche markets as well as those that appealed to the general public. 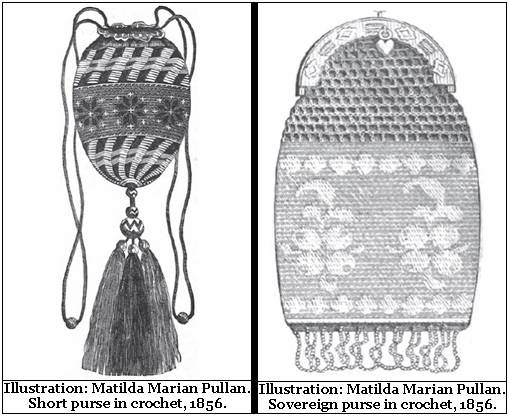 Although crochet has often been seen by many as a relatively lowly textile craft, possibly due to its lack of complex hand tools and the fact that it was often produced by the lower working classes, this does not negate the fact that at its best crochet can hold its own with the lace craft of which it is a form. Crochet has such a wide spectrum from extreme and robust simplicity to some of the most complex and delicate pattern work that can be produced by using one small hooked tool. It is therefore hardly surprising that it is seen by those within the craft as one of the most diverse of textile disciplines. That it is also one that will perhaps forever be associated with the amateur is not altogether a necessarily negative attribute. We have to ask ourselves why we sometimes feel that a discipline needs to be associated with a professional stance and why it should try to distance itself from its humble background. 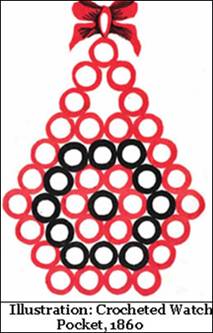 While the professional craft world moves ever closer to a fine art definition of itself, we have to wonder whether perhaps some connection with the generations of individuals and groups that made up the differing craft disciplines in the past, has been lost, disconnected in some way by the need to outwardly appear professional and perhaps more seriously as a validation of purpose, so that craft has to appear to be questioning and expanding, rather than just being.

Whatever the direction of craft professionals, it is perhaps heartening to know that possibly for generations still to come the craft of crochet will continue its highs and lows, appearing and disappearing over the coming century and possibly into the next. We can only hope.

Originally published in the 'Textile Blog'.