Colors generate a visually balanced output with an effect; pleasing to the eyes. Color blocking combines two or more fabrics of complementing colors sewn together in a creative way, and appealing to the eyes. A best known example of color blocked apparel is the red and blue Spiderman costume.

History of color blocking can be traced back to the 60s, popularly known as the 'Mod Fashion' then. Mondrian Dress designed by the late designer Yves Saint Laurent during the 60s consisted of flat planes revealing the artistic sensibility of that time. During the passage of time, color blocking has evolved into other geometric shapes and angular patterns in a range of vibrant hues. The trend evolved into an innovative, bold and creative style of clothing. Color blocking originally belongs to London. The British youth set the trend, which was later followed by the rest of the world. The muted pastel palette of the 60s fashion later transformed into bright, bold colors that were often applied in geometric patterns.

Initially, square or rectangular blocks of clothing were sewn along. Color blocking involves cutting the material where the color assortment is needed, with a seam allowance added to the edges. When the fabric pieces are sewn along, the final output is similar in size and form as of the original piece with two or more complimenting hues. Color blocking best suits simple and bold designs as elaborated designs would require more seams making it a complex process.

Order of construction is a lot of necessary in these garments, as stitching around sharp angles are tedious requiring much focus and attention to details. Color blocking is totally different from appliqué wherein; in the latter, one form is stitched onto another piece of material. Appliqué needs lots of pinning, but is relatively easier than color blocking. Similarly, appliqué also varies in piping where a different color cloth is sewn into the seam in such the way that it protrudes visibly in the apparel.

Nature's color palette is an assortment of blues and blacks of a seascape, lush greens of a jungle and hot arresting reds. A talented designer understands the delicate interactions of those hues and bonds them with layers of alternative colors bringing in an appealing look to the garment. An ideal assortment of shades play a vital role in defining the planning of the finished outfit.

The Color Palette - Rule of the two-thirds: 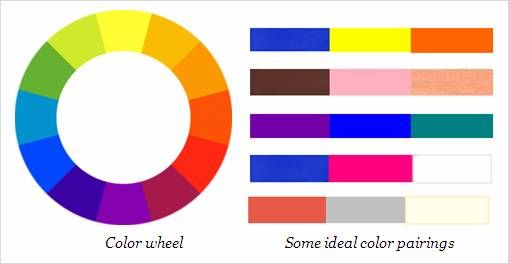 Color blocked outfits add a spirit of freshness to any form of clothing, and grabs attention. Today people wish to look more fashionable and presentable. Color blocked apparels are now becoming a hot trend. An ideal combination involves up to three colors. The most popular theory is the 'Rule of the two-thirds' where shades are picked from the three sides of an equilateral triangle in the color wheel. The hues that touch the three sides of the triangle will always complement each other. 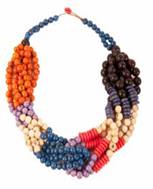 Today's retail market seeks color blocked apparels with an overall effect with flattering styles. Bold hues of tangerine, bright red, electric blue, fresh limes, and alpine green are in vogue. Pastel shades are also used in contrast to the brighter shades. New color combinations are being introduced in the market every now and then to suit the changing fashion trends and customer choice. 'Tonal Color Blocking', which consists of a new dimension with a light and a dark shade from the same color palette, is in style.

Color blocking is also springing up as a hot trend in fashion accessories. Attractive fashion accessories featuring geometric lines with an eye-catching color assortment are seen. The contrast of two or more shades ranging from bright neon's to calm neutrals iswhat that makes the trend. Jewellery, handbags, shoes, scarves and other fashion accessories with color blocked patterns draw attention of the season.

Color blocking adds a graphic element to apparels. They give a magical effect to simple clothes transforming them into architectural pieces. Color blocking clothes can be rightly described as a 'Fashion Optical Illusion'.