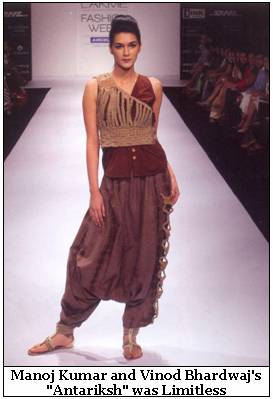 Fashion weeks have been evolving and every new edition throws up a new format, new outlook and perhaps even new objective. What started basically as an attempt to showcase the creativity of Indian designers to the international buyers, we seem to have slightly drifted from it, inasmuch as the commercial aspects of the fashion weeks are not that important now. That seems to be the trend, if one were to read the media coverage as well as see the reflection of this trend in the proliferation of number of fashion shows/weeks being organized in the smaller towns, too. How far this is compatible to the prime objective, I would it to our readers.

Nonetheless, it must be acknowledged that the new and upcoming designers are now occupying the space which was hitherto meant for established designers. What is really encouraging is that these new designers whom I would call GenNext designers are giving really good account of themselves and aspire hope for the future.