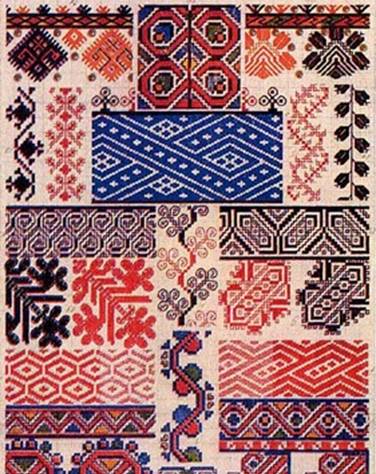 Of the many distinctive and cultural areas that go to make up the present day country of Romania, Bucovina although one of the smallest regions, does still have an individual presence in Romania.

Bucovina, although technically a part of the Romanian region of Moldova, not to be confused with the neighbouring independent country of the same name, has a long and substantial history of craft traditions, one of the most interesting and long standing of which is that of embroidery.

European embroidery has always been identified regionally, particularly when considering the work produced in Central and Eastern Europe. Bucovina has for centuries been ruled and occupied by a series of various nations and empires from Poland, through to Turkey, eventually becoming part of the multi-national Austro-Hungarian Empire. Through all of these various differing cultural and political systems, Bucovina maintained its own identity. However, being part of a larger European crossroads of cultural and traditional exchanges, decoration and crafts within the region were obviously influenced and the embroidery examples shown here give some impression as to the range of Bucovina decorative work.

Traditional embroidery pattern work of Bucovina is that of a relatively strict geometrical style with linear design work being particularly popular, although abstract floral work is also incorporated in the naturally traditional style of the region. It must be said in all fairness that this is not a style reserved exclusively for Bucovina. It can indeed be found across the differing areas that make up modern Romania. However, although many see this geometrically linear decorative style as being typical of areas such as Bucovina, the larger region of Romania is a complex patchwork of cultural and ethnic layers, many overlapping. This has made identifying and disentangling true regional styles all the more complicated.

To add to the complexity of the situation even just in Bucovina itself, there is a range of embroidery styles that span from strict geometrical pattern work to that of true representational floral work, some even incorporating the two extremes of embroidered styling within the same costume. The non-abstracted floral style in particular, could be seen as the work of influential styles being introduced into the region from a number of directions, whether that be Hungary, Poland, Russia or Turkey, all at one time immediate neighbors or occupying powers of Bucovina and all having this particular style of floral work within their own decorative vocabulary. 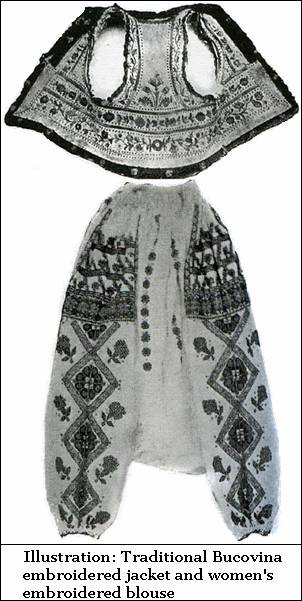 Rather than seeing the complexity of embroidery work in regions such as Bucovina as a dilution or contamination of the traditions of the region by outsiders, it might be better instead to celebrate the multi-layered fusion of styles that recognises the important role of cultural crossroads that Bucovina, its people and its craft work played over the centuries. It would be a mistake to see regions such as Bucovina, which is by no means singular in its experience, as a form of European regional backwater that contributed very little and was bypassed by the major cultural and decorative movements of the continent.

The accumulation of varying styles and traditions within generations of craft work such as embroidery, have added an inestimable amount of experience and inspiration to artists and designers across the whole region of Central and Eastern Europe for much of the nineteenth and well into the twentieth centuries. It is the stored vocabulary of regions such as Bucovina, that have helped to expand the parameters of the decorative arts of Europe, and their experience within the craft world can only continue to add to that richness.

This article was originally published in the Textile Blog.