Home / Knowledge / Article / Leather / Will Gold Shine in the Gloom?

Will Gold Shine in the Gloom?

The stock market may have been flat for the past few years, but there are still some lucrative investment options available. In addition to the opportunities in the equity market itself (see page 3), there are several prospects in other asset classes.

This is because each asset class has a different cycle, which investors can use to their advantage. For instance, gold has delivered high returns over the past four years. Even in the US, gold has been beating equities for the past 12 years.

But will gold continue to generate better returns in the coming years as well? It seems likely because the factors that are pushing gold prices up are expected to remain for a few more years. However, gold investors need to be cautious in the short term as the market will be volatile.

Though gold is supposed to be a hedge against risk, it has been fluctuating in the international market along with other risky commodities in the recent past. This is because people are worried about their money and do not believe they will be able to earn good returns on it.

So, they are stacking assets that are perceived to be safe, such as the dollar, the yen and treasuries from the US and Germany. This may lead to a minor correction in the price of gold during the short term. "Due to the strengthening of the dollar, gold may fall from about $1,600 an ounce now to $1,300," says Praveen Singh, senior commodities analyst, Sharekhan.

Though gold is being considered as a risky asset currently, perception will change once the Euro zone crisis peaks, and this may trigger a rally in gold. "If the European situation gets out of control, demand for gold may increase in Europe itself. Gold prices may climb back to $2,000 an ounce in 1-2 years," adds Singh.

To fight the ongoing Euro zone debt crisis, central bankers across the world will be pumping in money to stimulate their economies and also to keep their currencies cheap. So, will the US Federal Reserve announce a third round of quantitative easing in its meeting on 19 June? "Though growth is slowing down in the US, it is not enough to warrant a quantitative easing now," says Sonal Varma, economist at Nomura India. However, a flare up in the Iran-US nuclear stand-off could trigger a gold rally. 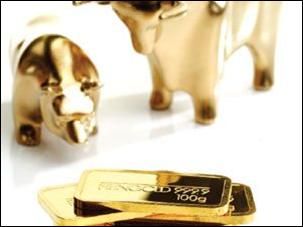 Another factor that may put pressure on gold is the fall in the Indian demand. Though the international gold price has corrected from $1,935 an ounce to about $1,600 now, the price has not corrected in India because of the depreciation of the rupee. Since Indians are not comfortable buying gold at Rs 30,000 per 10 g, demand has fallen drastically, reducing gold imports by nearly 50% in the first half of 2012 compared to the same period in 2011.

The recent government measures, such as increasing the import duty and making PAN card compulsory for buying/ selling bullion in excess of Rs 2 lakh, have also dulled the sheen. "Hopefully, things should improve during the marriage season in October and November," says Prithviraj Kothari, president, Bombay Bullion Association.

However, the Chinese demand for gold is increasing at a fast pace and China has already overtaken India as the largest consumer of gold in the world in the first quarter of this year. What is driving the gold demand in China? Firstly, there is greater prosperity and feel-good factor in China. However, the Chinese are wary that the ongoing global crisis may hit their country too. "The Chinese are buying gold to protect the wealth that they have earned during the good times," says Ajay Mitra, MD, WGC India and Middle East, World Gold Council. The increased Chinese demand will compensate for the fall in demand from India, so prices won't be affected much.

Cautious in the long term

Central banks cannot continue to pump money into their economies forever. Though inflation across countries is capped for now because of the global economic crisis, central bankers know that their current actions are inflationary in nature and that prices will rise once we are out of the crisis. Whenever inflation will reach unbearable levels, the apex banks will have no option but to bring it under control.

This will be done by increasing interest rates or by withdrawing the stimulus money from the market. This means that the investors who buy gold when a correction may happen should be aware that their good run will not last long. They should be ready to exit when global inflation starts rising again. Otherwise, they may be in for a nasty surprise, similar to what happened during 1980-2002, when gold crashed by around 70% (in dollar terms). Though the crash in India may not be this high (because of the impact of the depreciating rupee), gold investors here will also have to go through the pain.

How should you invest in gold?

Though several options are available for investing in gold, the best one is to put money in gold exchange traded funds. Compared to physical gold, these are exempt from wealth tax, offer preferential treatment in case of capital gains tax and there are no worries about impurity or security. Investors who don't have a demat/trading account will have to go through the gold savings fund route, that is, through fund of funds that invest in gold ETFs.