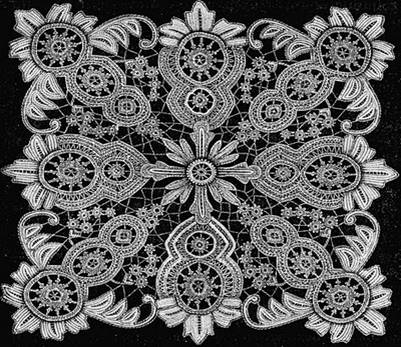 Although crochet can often be closely, although inaccurately twinned with knit, it has in fact long been associated with lace rather than knit. In many respects, it could be seen as a simpler, though still effective interpretation of lace skills. Although obviously not as fine and accomplished as professional lace making, depending on the materials used and the fineness of both yarn and needle, a wide variation of crochet can be achieved. 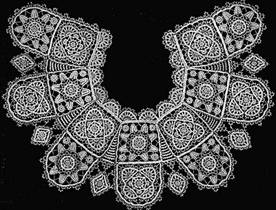 Crochet can be produced quickly and efficiently with one hook and a continuous chain. From this relatively simple process, much more complex patterns and interpretations can be achieved as is shown in some of the examples that illustrate this article.

In the mid-nineteenth century, the skill became particularly widespread in Ireland where extra income could be achieved with little initial outlay. Crochet pieces were produced in large numbers and were used within costume and domestic interiors for such items as collars, cuffs, pillow borders and table linen.

The Irish used cotton and silk more frequently than other materials. This, along with the combination of very fine crochet needles, produced work that was much sought after in mainland Britain and further a field. Although not strictly or technically lace, the standard of Irish crochet examples from the nineteenth century are relatively high and are now rare and much sought after. 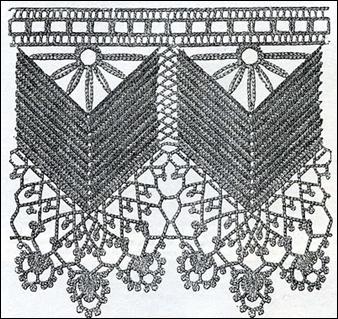 It is unfortunate in some respects that we tend today to judge so many of the textiles craft skills by the standards of the revival and reinterpretation of the 1960s and 1970s. The revival was justified as so many textile craft skills had fallen from the heights achieved during the late nineteenth and early twentieth centuries when skills reached a plateau of creativity, popularity, but perhaps more importantly still one of general acceptance and critical acclaim within the fine art and decorative arts world.

However, it was perhaps the reinterpretation or re-imagining of so many traditional textile craft skills in the 1960s and 1970s that has left us with our own biased opinions concerning these skills. Crochet is a particular, but by no means unique casualty of this era. Often very fine pattern work that had been produced in the nineteenth century in order to imitate lace work was now being interpreted and reinvented with much brighter yarns, often using unsympathetic acrylics and much clumsier needles. Pattern work interpretation and finish inevitable suffered with much of the delicacy and subtlety of the original pattern work lost. 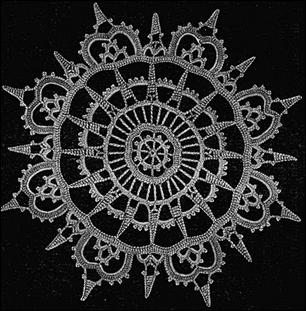 To be fair, one of the prevailing ideas in the 1960s and 1970s as far as textile crafts was concerned, was one of the loosening of the rules and regulations that often plagued traditional crafts. However, this worthy ideal was often badly reinterpreted by self-styled experts, many with little if any design knowledge. The penchant was much more one of changing pattern work, colour and materials for the sake of the change rather than adding to the skill. Books and magazines of the period dealing with crochet would often encourage the use of thick yarns and needles in order to achieve a quick, bulky and obvious result, rather than spending labour intensive time achieving a much smaller, less showy but more accomplished result. As a consequence crochet along with many other textile craft skills have suffered decades of negative publicity.

Crochet is a delicate and fine skill. Pattern work can be extraordinarily complex and visually stunning. Perhaps in time, we will be able to see past the thick, overly bright red, orange and lime acrylic yarns and the heavy and labored pattern work that were so much a part of the 1960s and 1970s re-imagining of this delicate skill.