India is country in South Asia. It is the second most populous country with over 1.2 billion people, the most populous democracy and the seventh largest country by geographical area. It shares land borders with Pakistan to the West, Burma and Bangladesh to the East and Nepal, Bhutan and China to the North-East, bounded by the Indian Ocean in the South, the Bay of Bengal in the South-East and the Arabian Sea in the South-West.

The Tradition of Textiles in India

The origin of Indian textiles can be traced to the Indus valley civilization (some 5000 years ago). India has a diverse and rich textile tradition. 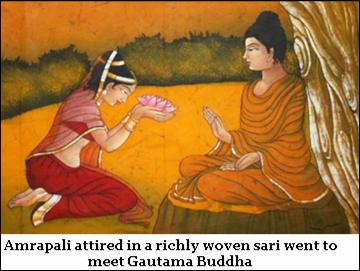 Excavations at Harappa and Mohenjo Daro have unearthed household items like needles made of bone and wooden spindles, pieces of cotton stuck to a silver vase, all suggesting that the people spun cotton at home to make yarn and finally garments. Craftsmen of Mauryan Empire, Ashoka's rule and Gupta Age excelled in weaving, under royal patronage. Information about ancient textiles of India can be garnered from the various sculptures belonging to the Mauryan and the Gupta ages as well as from ancient Buddhist scripts and murals. According to legends when Amrapali who was a courtesan living in the kingdom of Vaishali (in present day Bihar), went to meet Gautama Buddha, she was attired in a richly woven sari. This testifies to the technical achievements of the ancient Indian weaver.