Industrialization is considered to be the key for the development in economic terms. At the same time it is also recognized to be the root cause for environmental perspective. The understanding that environmental pollution is a worldwide threat to public health has given rise to new initiatives for environmental restoration for both economic and ecological reasons. Toxic and hazardous pollutants are found in the industrial effluents. One particular class of synthetic chemicals which is of major concern is synthetic dyes and dye intermediates. 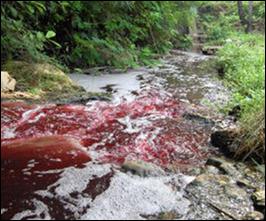 Due to rapid changes in the customer's demands, the textile dyeing and furnishing industries use wide variety of dyestuffs. More than 100,000 commercially available dyes are known and the world annual production of the dyestuffs amounts to more than 7x105 tonnes. Azo dyes which are used as textile colorants designed to bond covalently with cellulosic fibers (i.e. cotton) are extensively used because of their wide variety of color shades, ease of application, high wet fastness profiles, minimum energy consumption and brilliant colors. It has been estimated that more than 10 - 15 % of the total dyestuff used in dye manufacturing and textile industry is released in to the environment during their synthesis and dyeing process. Approximately 2, 80,000 tonnes of textile dyes are discharged every year worldwide. Waste streams generated from textile industries are hazardous and difficult to biodegrade owing to the presence of recalcitrant dyes and pigments. The problem of environmental pollution from textile industry has a serious dimension as India is a major producer and exporter of textiles. (Sarayu and Sandhya, 2009)

Environmental problems of the textile industry are mainly caused by discharges of wastewater. The textile sector has a high water requirement. Its biggest impact on the environment is related to primary water consumption (80100 m3/ton of finished textile) and waste water discharge (115175 kg of COD/ton of finished textile, colour, a large range of organic chemicals, salinity, and low biodegradability). Hence, the reuse of the effluents represents an economical and ecological challenge for the overall sector. Depending on the nature of the raw material and product, textile processing employs a variety of chemicals. The effluents resulting from these processes differ greatly in composition, used fabrics and machinery, due to differences in processes. Main pollution in textile wastewater came from finishing and dyeing processes. They require the input of a wide range of chemicals and dyestuffs that are generally organic compounds of complex structure. The final product becomes a waste and causes disposal problem because all the mentioned chemicals are not contained in it.

Dyes and dyestuffs find use in a wide range of industries but are of primary importance to textile manufacturing. Increasingly, the environmental and subsequent health effects of dyes released in textile industry wastewater are becoming subject to scientific scrutiny. Wastewater from the textile industry is a complex mixture of many polluting substances ranging from organ chlorine-based pesticides to heavy metals associated with dyes and the dyeing process. Inefficiencies in dyeing result in large amounts of the dyestuff being directly lost to the wastewater, during textile processing, which ultimately finds its way into the environment.

Dyes and dyestuffs find use in a wide range of industries but are of primary importance to textile manufacturing. Enormous volumes of effluent are generated at different stages of textile manufacturing, due to the usage of copious amounts of chemicals and dyes. Wastewaters from textile industries are a complex mixture of many polluting substances like salts, acids, heavy metals, organochlorine-based pesticides, pigments, dyes etc. Several tons of textiles required to meet up with societal demands are produced daily in this industry. Lot of effluent is derived from the textile and dyestuff activities. This can provoke serious environmental impact in the neighboring receptor water bodies because of the presence of toxic reactive dyes and dark coloration. Increasingly, the environmental and subsequent health effects of dyes released in textile industry wastewater are becoming subject to scientific scrutiny. Textile dyeing industries are facing problems to safe discharge of wastewater due to complex nature and hard-to-treat by conventional methods. In recent years, biological decolourization using potential microorganisms capable of decolourizing and detoxifying the synthetic dyes has been considered as a promising and eco-friendly method.

The textile industries produce effluents that contain several types of chemicals such as dispersants, acids, leveling agents, carriers, alkalis and various dyes. The textile factories daily discharge millions of litres of untreated effluents in the forms of wastewater into public drains that eventually empty into rivers. This alters the pH, increases the biochemical oxygen demand (BOD) and chemical oxygen demand (COD), and releases intense colourations in the river. The use of these water resources is limited and the ecosystem is affected. Many procedures are used in the treatment of textile effluents to achieve decolourization. These include physiochemical methods such as filtration, use of activated carbon, chemical flocculation and specific coagulation. Some of these methods are effective but quite expensive. The ubiquitous nature of bacteria makes them invaluable tools in effluent biotreatment. Biotreatment offers a cheaper and environmentally friendlier alternative for colour removal in textile effluents.

Biological treatment is the often the most economical alternatives when compared with other chemical and physical processes. Biodegradation procedures such as microbial degradation, fungal decolourization, adsorption by (living or dead) microbial biomass and bioremediation systems are commonly applied to the treatment of industrial effluents because many microorganisms such as yeasts, bacteria, fungi and alges are able to accumulate and degrade different pollutants.  However, their application is often restricted because of technical limitations. Biological treatment needs a large land area and is constrained by sensitivity toward diurnal variation as well as toxicity of some chemicals and less flexibility in design and operation. Biological treatment is incapable of obtaining satisfactory colour elimination with current conventional biodegradation processes. Although many organic molecules are degraded, many others are recalcitrant due to their complex chemical structure and synthetic organic origin. (Anonymous1)

Bacillus sp, an effective spore forming organism revealed a result in degrading and decolorizing the textile effluent that was one of the major environmental pollution in modern world. The continued development and application of biotechnologies for the biodegradation is limited primarily by physical factors such as pH, substrate concentration and temperature. Biotreatment offers a cheaper and environmentally friendlier alternative for colour removal in textile effluents. The ubiquitous nature of bacteria makes them invaluable tools in effluent biotreatment (Vigneeswaran etal., 2010).