The Indonesian Archipelago is renowned for fabrics decorated using resist methods such as Ikat. These techniques are known as resist method because materials are used during the process of dyeing that repel the dye. Resist material may be attached to the yarn before weaving, as is the case with Ikat , or applied to the surface of the woven cloth. Although the Indonesian terms Ikat has entered the international textile vocabulary, it is a part of two other important traditions, TEXTIL and PELANGI.

In India "IKAT" is known as Bandha in Orissa, Bandhni in Rajasthan, Pochumpalli in Andhra Pradesh, and so on derived from many concepts, some are from the term tying while some other from place of production however, in textile term it is commonly known as 'IKAT'. 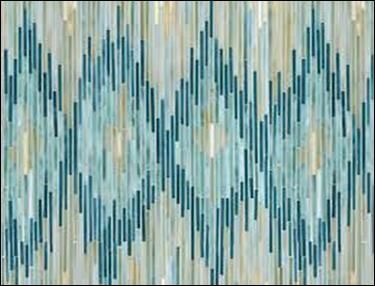 The term Ikat which is a Malayan word and introduce into the European language by reoffer comes from the word Mangikat, Which means to bind, knot or wind round.

Ikat is a Malayan word and refers to a technique for producing pattern in a fabric by partly dyeing the threads before weaving.

Ikat is a very elaborate way of decorating cotton and silk textiles by resist dyeing the yarns before weaving. Designs are reserved by tying the yarns in such a way that the united sections will absorb dye when immerged in a colour bath. For subsequent colour, new binding will have to be applied and depending on the design, earlier ones removed.

There are three main types of Ikat:-

1) Warp Ikat- Whereby the dyeing process is applied to the warp.

3) Double Ikat- The most elaborate form, whereby both warp and weft threads are dyed.

Example of the double Ikat is the prized patoas from Gujarat.

Skilled crafts people can work with amazing precision in preparing the yarns before dyeing and weaving.

Still, Ikat textile can be recognized from a slightly jagged appearance in the pattern. The technique has been used for centuries in various part of the word, and it is till widely practiced in India and South East Asia.

Warp Ikat:-Warp Ikat fabrics are often woven on a continuous warp in the remote parts of the archipelago where older forms of the traditional technology have survived.

Warp Ikat is very important in the Eastern Indonesian Island of Flores, Sumba, Savu, Roti, Timor and lembata and in the Moluccas (Maluku). 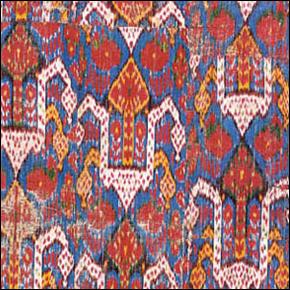 The resist material is applied during the warping up process when the yarns are extended between two bars which are later replaced by warp and breast beam. Dyers do not usually need plans when making patterns with which they are familiar thought outlines are sometimes drown on the warp with charcoal. A variety of patterns guides are used however, when new or especially complex design has to be prepared. Today many designs are recorded on graph paper, thought in the past palm leaf attice and bamboo were used in some areas dyers also refer to old textile, Which are used as a kind of designed library and combine tried and tested pattern in new ways.

Tying the resist material on the warp is labor intensive and dyers sometimes use time saving method, in savu and parts of Flores and Timor patterns are replicated by binding several hanks and dyeing them together. The separate section are usually tied together prior to dyeing so that they are decorated with the same warp Ikat design, which are carefully matched when the textile are joined to one another.

Indigo is often dyed first, though much immersion in the dye bath may be required to produce deep blue. Then some of the ties are removed in readiness for dyeing with a second strong colour, usually either red or dark brown. The last ties to be takes off are those that protect the parts of the design which will be colored with light hues such as green or yellow.

Weft Ikat:- Unlike warp Ikat, Which is rarely used to decorate silk, the weft Ikat method is associated with court based societies rather than the small culture of the more remote regions, Generally speaking weft Ikat is found in the low laying and coastal areas where world religions have long been influential.

The weft yarns are stretched on a frame and are tied with dye resist at binding before immersion in a dye bath.

Not all the colors on factory made weft Ikat are dyed with resist method. Dyes are sometimes applied directly to the yarn with a spatula to produce highlights, To prevent the dyes spreading the area around the design feature is masked with bindings, and after it has been dyed the newly colored section is tied with plastic string to protect it from subsequent immersions in the dye bath.

Double Ikat:-In insular South East Asia the double Ikat method, in which both warp and weft are resist dyed, appears to be restricted to the village of Tenganan in East Bali, This techniques is also known in India and Japan, though it remains unclear whether or not it was introduced to the Archipalango from either of these source.

Double Ikat fabrics are not only complicated to dye but as difficult to weave and the basic procedure are worth discussing here. The cotton yarns are prepared for dyeing by soaking them overnight in a solution of candient oil, wood ash and water, after which they are sum dried for fine to twelve days, before tying the warp and weft are stretched on different frames, and the one used for the weft can be adjusted to the desired width of the finished cloth. The warp and the weft are constantly compared and measured to ensure the correct alignment of the design in the finished cloth.