Fashion to fit every man's style

Men are waking up to the beauty of being well dressed and stylish. Be it a desire to look dashing like Don Draper of 'Mad Men' or a wish to look sporty, men are ready to spend a hefty sum to enhance their look and style. This attitude of men and their increasing fancy is boosting the global menswear market.

Global market for menswear grew by 2.9% and reached $377,765.2 million during 2011. Analysts predict further 13.9% drastic growth in the segment and forecast it to reach $430,415.2 million by 2016. US comprise 35.4% of the total menswear market. Growing with a much faster pace than womenswear, industry analysts predict that in the coming years, the shift will be driven by China. The country's sales are increasing by 20 - 25% for a year, and menswear segment comprise of approximately three quarters of the market. China's consumers are likely to make up 70% of the global luxury market. Recession cooling down apparel sales in US and EU markets are creating opportunities in the Chinese market.

Brands for the Martians: 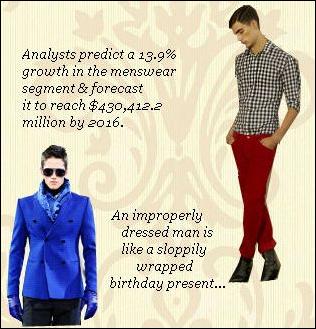 Menswear is available in a wide range of collections including; casual shirts, polos, t-shirts, jeans, knitwear and jackets are available in a wide range of styles and sizes. Brands such as Hugo Boss, Hackett, Ted Baker, Barbour, Henri Lloyd, Paul Smith, Armani Jeans, Ralph Lauren and Lyle & Scott are notable for menswear. Brands Hugo Boss, Burberry, Giorgio Armani, and Ermenegildo Zegna makes almost 50% of its €1 billion revenue from the Asian countries. German brand Hugo Boss generates a sizable amount of its revenue through its menswear collections. By 2015, the brand is targeting sales revenue of €3 billion. Saks Fifth Avenue has increased its collection of menswear, and is further chalking plans to become one of the biggest menswear brands in the near future.

An improperly dressed man is likely to look like a sloppily wrapped birthday present. Bain & Co. estimates global menswear luxury market growing by 14% a year, which is almost twice of womenswear market. Men do not have the habit of shopping a lot, but are consistent, and remain loyal to their brands. Much influenced by factors such as smartly dressed celebrities, TV shows such as Mad Men, and the desire to look smart with a corporate look, men are now gearing up in competition with women in shopping. Much of the sales of menswear are formal wear. Men are more particularly getting interested to look their best while at work, or while attending an interview.

Retailers latching into the segment:

Retailers latch in into the increase of demand in menswear. Burberry has plans to open its first menswear standalone shop in UK. The brand is much popular for its trench coats, and checked patterns. It has acquired a 26% increase in the sale of menswear in the year to March 2012. Retailers who were primarily concentrating on womenswear are seen expanding their operations into the menswear segment as well. Jaeger has recently opened its first standalone menswear store in Canary Wharf with their collection mainly focusing on tailoring. Jigsaw and Asos have also ramped up their menswear collections. Retailers either go for offering their own collections, or partner up with other established players.

Menswear is currently considered to be a category with significant growth opportunity. With an expected double digit growth in 2012, supplemented with an expanding range of product line, menswear will be the best positioned to satiate manufacturers, retailers and customers.