Home / Knowledge / Article / Industry / The Denim Jeans Scenario in the US

The Denim Jeans Scenario in the US

The love affair with denim crosses continents, continues to inspire creativity in products beyond jeans, and shows resilience even in economically uncertain times. In the U. S. alone, more than 9 out of 10 consumers have purchased denim jeans and individuals own an average of seven pairs. With cotton price volatility in 2011, some retailers and brands substituted other fibers for cotton in denim jeans to preserve monetary margins. Recent research shows that consumers are aware of these changes in denim jeans and are dissatisfied with shifts away from cotton. High levels of cotton fiber content ensure the qualities of comfort and durability that consumers expect for denim jeans to be and feel authentic. Given that fiber prices have normalized and that consumers have voiced their preference for cotton, retailers and brands may want to reevaluate the fiber content in jean offerings. 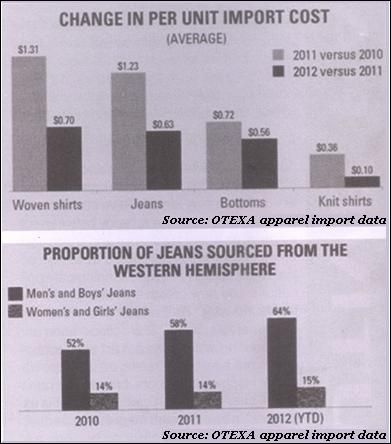 Price Pressures Decreasing: U.S. import data indicate that denim jeans were among the categories to see the greatest per unit price increases following the unprecedented spike in fiber prices that began in 2010. The average cost of importing jeans increased $1.23 per pair in 2011, relative to the average import cost in 2010. The magnitude of this increase was second only to the average costs for woven shirts (+$1.31). For comparison, the average per unit increase for knit shirts was $0.36 per unit, and the average for the bottoms wear market (e.g., pants, shorts, skirts) was $0.72 per pair. If the surge in fiber prices in 2010 is assumed to explain most of the changes in sourcing costs, denim jeans could be among the product categories that will have the largest decrease in average import costs as cotton prices return to levels near historic averages. Indeed, recent import data prices for men's and boys' and women's and girls' jean imports have already begun to show predictable declines back toward average prices before 2011.

Shifts in Sourcing: Recent changes in sourcing costs have been accompanied by shifts in sourcing locations. These changes widened existing differences in the countries where retailers import jeans for males and females. Jeans for men and boys are largely sourced from Western hemisphere countries. Mexico is the largest single source of jeans for men and boys. Seasonally adjusted data for the first four months of 2012 show that Mexico's share of the men's and boys' jeans market averaged 49%, reaching its highest level since 2005. In contrast, women and girls jean imports primarily come from Asia, with China being the largest single supplier.

Since 2008, Mexico's share of male jean imports has risen each year and climbed a total of nearly 10 percentage points. Nicaragua increased its market share from less than one percent of unit volume in 2007 to 7% in 2011. Thus far into 2012 (year-to-date April), the Western hemisphere has accounted for nearly 65% of men's and boys' jean imports. China, the second largest source of male jeans after Mexico, saw share decrease from more than 15% in 2010 to only 8% in the first four months of 2012. Bangladesh, the third largest sourcing country, has seen share fall from more than 11 % in 2010 to 8% year-to-date in 2012.

Quality and Cotton-Conscious Consumers: Due to increases in sourcing costs that occurred in response to higher fiber prices, some retailers chose to decrease the level of cotton in key apparel items, such as denim jeans, and increase the use of alternative fibers. As denim jeans containing higher proportions of artificial fibers began arriving on store shelves, consumers noticed both an increase in price and a decrease in the quality of their jeans. More than half of consumers (54%) indicated that clothing previously made of cotton now seem to be made of other fibers. Most consumers (53%) said their recent clothing purchases (within the last six months) did not seem to last as long, and six out of 10 consumers indicated that the clothing fabric, from recent purchases, seems thinner than in the past.

Significantly, the majority of both male and female consumers (53% and 62%, respectively) said they are bothered that retailers may be substituting synthetic fibers for cotton in their jeans. Retailers may not have anticipated that most consumers (63%) would indicate a willingness to pay a slightly higher price to keep higher levels of cotton in their jeans. For consumers ages 25 to 34, the willingness to pay more is even higher, with 69% being inclined to pay more to keep their jeans cotton-rich. Consumer reviews from a clothing retailer's web site help illuminate some of the concerns about the comfort, feel, look, and quality of current jean offerings. 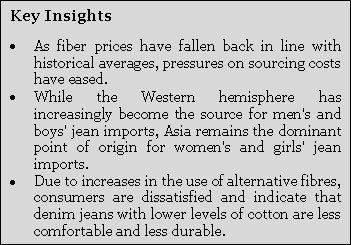 Lessons Learned: The denim jeans example provides a practical understanding of the degree that different apparel goods could be affected by changes in fiber prices. As heavier weight items, jeans contain larger amounts of cotton than lighter apparel items. When world fiber prices were higher, some retailers and brands reduced the cotton content in their jeans. Following these alterations in the jeans offered at retail, consumers have shown that they are aware of changes in quality that stem from changes in fiber content. After purchasing jeans with lower levels of cotton at a higher price, consumers noticed a decline in quality and have expressed their dissatisfaction. 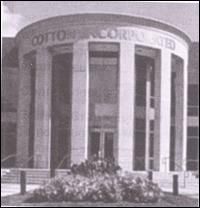 Consumers have come to trust the comfort and durability that only authentic denim jeans can provide. Recent experiences have demonstrated that jeans with lower levels of cotton are not meeting the standards that created the enduring enthusiasm for this apparel favorite. Consumers' obvious preference for the qualities that cotton delivers, along with the erosion of the price difference between cotton and substitute fibers, make a strong argument for retailers and brands to manufacture and sell jeans that match the cotton fiber content of their pre-2012 predecessors.

About the Research: Cotton Incorporated Lifestyle MonitorTM survey is a monthly online research study that gauges the attitudes and behaviors of U. S. consumers regarding clothing, appearance, fashion, home furnishings, fiber selection, and other topics. Each year, 6,000 consumers are surveyed, 60% female and 40% male, ages 13 to 70, and represent the U. S. population based on ethnicity, income, education, and geography. (This report is published here with the courtesy of Cotton Incorporated Lifestyle MonitorTM.)

This article was originally published in the "New Cloth Market" magazine, August, 2012. 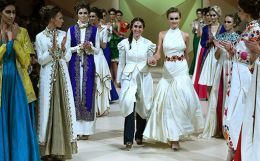 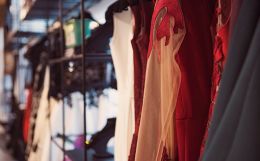