The English Arts and Crafts Tradition

TheArts and Crafts tradition, which arguably started in England in the nineteenthcentury and spread, through different forms, across a number of states andregions of the world, had a profound effect not so much on the direction anddevelopment of nineteenth and twentieth century design, but of moderncraft.

Whenwe talk of craft in the context of the nineteenth century Arts and Craftsmovement, and also that of the history of craft in the twentieth century, weare really meaning professional craft, rather than amateur. This does not implythat amateur craft systems have no bearing or merit. However, the modernhistory of professional creative craft, certainly in England, is one that isinextricably linked to the Arts and Crafts tradition.

TheEnglish Arts and Crafts movement was one that tended to have a particular ruralfeel and identity to it, despite the fact that many of the customers, admirers,supporters and practitioners, were urban based, many never having had any otherexperience than urban living. In this, England's experience of the Arts andCrafts revival seems somewhat at odds with its neighbours, Scotland andIreland.

Scotland'sArts and Crafts movement, although having a healthy regard for ruraltraditions, did seem to have more in common with the particular approach to theArts and Crafts tradition found in Central Europe. There, the movement wasoften more typically identified with urbanity, the sophistication of the citydweller being a core value of the movement. That a large part of Scotland'sArts and Crafts movement was centred on Glasgow, rather than the Highlands andIslands of Scotland, even in romantic illusion, makes the connection withCentral Europe, which was both intellectually as well as physically felt byboth regions, closer than the rural idyll portrayed by the English.

The Irish approach to the Arts and Crafts movement was different again from both English and Irish versions. Ireland's arts and crafts tradition became much more involved in portrayals of nationalism and cultural identity, which was all part of its struggle to gain an independent identity from the stranglehold of London. Therefore, this was always to be at the core of the Irish Arts and Crafts movement, as it was in other oppressed and underrepresented regions of Europe such as Norway, Poland and Hungary. 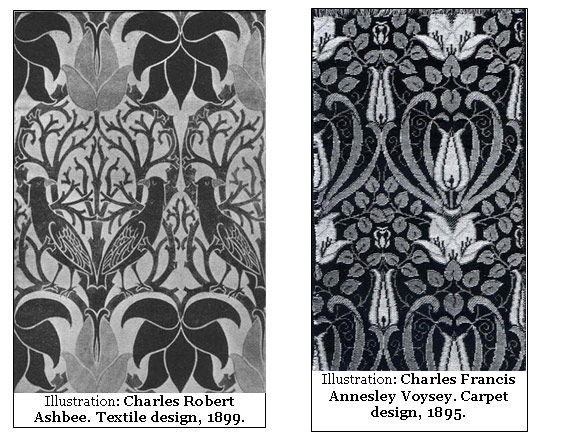 The 1890s saw the rise of the Art Nouveau movement, particularly in France. This new movement, in many respects, became an anathema to many in the English Arts and Crafts movement, but perhaps more importantly, it allows us an interesting opportunity to reflect, through the obvious differences of the two movements, what the English Arts and Crafts tradition really meant. It also gives an opportunity to see how different the two nations of France and England were constructed, at least culturally.

The Arts and Crafts movement had little direct impact on France. One of the reasons could be the fact that France has always been strongly centralised with Paris being the de facto political and cultural centre of the nation, with little if any rival. Therefore, the urbanity of Paris with its seeming city sophistication has always been able to successfully dominate French culture. The same cannot be said in England. 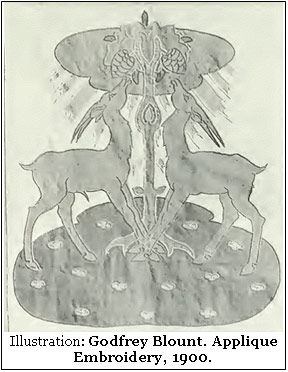 Although London as in Paris, has always been the political and cultural capital of the country, its urbanity has never really been able to dominate the English. Even though over the centuries more and more English have been sucked into urban environments, many still hold a rural identity as the norm for England, even though it cannot possibly exist for many.

With this polarity between the rural tradition of the English Arts and Crafts movement and the urbanity of the French Art Nouveau movement, can be seen the differences in approach, even down to construction techniques. Art Nouveau tended to revel in contemporary innovation and distraction. The complexity of technique, whether it be new forms of glass, metal awareness, or increasing intricacy in jewellery, were its mainstay, and in some respects could be seen as its reason for being.

The English Arts and Crafts movement on the other hand, was one whereby the simplicity and honesty of the craft was the tradition. Craft was to be seen as being outside of the contemporary world of marketing and business. It was not to be manipulated into innovation as a tool for sales. English craft was to be timeless and constant, and in most respects entirely divorced from the urbanity of London. 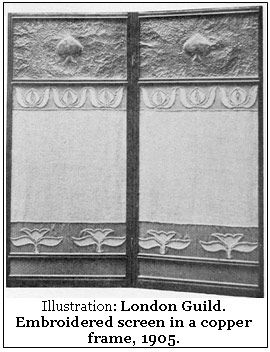 Although the tie to rural craft traditions could not always be maintained, mass production, or at least some form of mechanisation, was used by at least some elements of the English Arts and Crafts movement, the binding idea of simplicity and honesty over affectation and deception, were core values that didn't change, despite the intrusion of practical circumstances and compromises.

A number of nations and regions were actively involved in the Arts and Crafts movement. Most already had strong craft traditions of their own. Northern and Central Europe, as well as Russia had long and sturdy craft traditions. The same was true of North America and Japan. However, what the English Arts and Crafts movement did do was give other regions around the world an ability to focus and crystallise a number of localised rural craft traditions into one easily identifiable moment and one recognised movement.

In England itself, the Arts and Crafts tradition forever romanticised its rural roots. Although many of the guilds and associations that were created across England in the latter half of the nineteenth century, were overwhelmingly urban based, the belief that if practically possible, nirvana would be found if they were able to relocate to a rural setting, was always paramount. This was rarely put to the test, but when it was it was not always as simple, effective and successful as it was hoped to be. However, this has never stopped the English and their propensity for constantly reimagining and reinterpreting the rural idyll. A country nirvana is still very much the dream of many urban dwellers.

By:
John Hopper
Published: Sep 2012
Reuse this Content
Our Clientele