Legends assert lotus as a celestial flower for the Hindus, and Buddhists. Fibres extracted from this divine flower are used for making fabrics with amazing virtues.

The lotus flower is adored for its characteristic of rising above the muddy water, indicating how one can rise above defilements of life. Apart from motivation for life, the plant also provides fibres which are used for making a rare kind of cloth matching with the flawless virtues of the silk. Fibres extracted from the lotus flowers of the Myanmar lakes are spun by hand and woven within 24 hours making a fabric similar to silk.

History of the fibre:

Extracting fibres from lotus stems have been in practice since 1910. Later during the 90's designers of Japan setup workshops to create a foreign market for their fabric. But due to low demand in Japan, lotus fibre fabric remained a rare and handmade textile.

Lotus plant is believed to have healing abilities and wearing a fabric made from lotus fibres is also believed to have the same effects. Lotus plants are pure by virtue, and they radiate this purity through their fibres. By wearing lotus fibre fabrics, one feels calm, peaceful and meditative. It also cures the wearer from headaches, heart ailments, asthma, and lung issues. The fabrics are 100 percent organic, and hence are environmentally friendly. 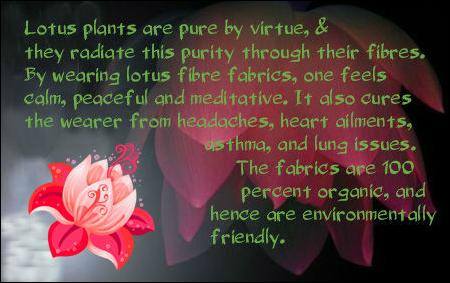 The entire process of fibre extraction, spinning it into yarn and making the fabric is completely handmade making the process time consuming. This also limits the quantity of the fabric produced. Stems of the lotus plants are collected, cut, snapped, and twisted to expose its fibres. These are thin and white filaments around 20 to 30 in number. These thin filaments are rolled into a single thread. Around 20-25 women are needed to extract fibres this way for one weaver to work with. 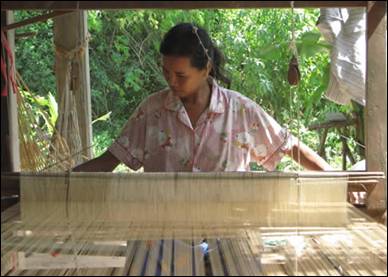 Fibres extracted from the stem are spun into yarn. Extracted fibres are placed in the skeins on a bamboo spinning frame preparing them for warping. Yarns are made by placing the fibres on a bamboo spinning frame and transferring the thread into winders for warping. With much care, not to get tangles, threads are made; up to 40 meters long. The threads are then taken from the warping posts, and are coiled into huge plastic bags. Yarns for the weft are wound into bamboo bobbins.

Fabrics are woven in the traditional Cambodian loom. Excess warp is stored and later released during the course of weaving. The woven fabric has a width of approximately 24 inches. During the process of weaving, threads are frequently moistened with water, as lotus fibres need to be kept cool. Around 1, 20,000 lotus stems are required to make fabrics adequate for making a costume. The fibres are very delicate and should be woven within 24 hours of being extracted so as to prevent its deterioration.

The fabric looks like a blend of linen and silk, and posse's wrinkle resistant and breathable qualities given by the molecular makeup of the lotus plant. It has a milky yellow hue. Textile baron Mr Pier Luigi Loro Piana, owner of the Italian luxury brand Loro Piana, happened to see the fabric. Impressed by the fabrics breathable, and wrinkle resistance capacities, Pina travelled to Myanmar where he learnt more about the fabric. He offered by buy around 55 yards of fabric for a month for his company. Jackets of Loro Piana made from lotus fibre fabrics cost up to $ 5,600 and have a good market in countries like Japan and Europe.

Lotus fibres have age old tradition of making robes for Buddhist monks of highest ranks, and to decorate Buddha idols. Traditional fabric weaving is difficult to be translated into mass production. Involving exclusive craftsmanship, and time consuming in its making, lotus fibre fabrics remain as a true luxury only for the privileged ones.