Through the course of billion years, nature has gone through a process of trial and error to refine the living organisms, processes and materials on planet Earth. The emerging field of Biomimetics has given rise to new technologies created from biologically inspired engineering in both the macro scale and nano-scale levels. Biomimetics may also offer solutions to environmental and social problems caused due to dyeing. Dyes have been recognized as carcinogenic and harm the flaura and fauna as well. Natural color mechanisms and structural study of such natural phenomenon may offer best alternate to dyes and therefore may revolutionize the dyeing and printing industry.

Animals, plants and insects in nature evolved over billions of years to develop more efficient solutions than comparable man-made solutions to date. Some of these solutions have inspired humans to achieve outstanding outcomes. Several examples can be quoted for this and self cleaning materials which are derived from emulating the lotus leaf effect, production of hollow fibers inspired from polar bears, etc are just a few of them.

Why do we need a substitute for dyes?

Dyes usually are of synthetic origins and have aromatic molecular structures. The dye effluents are highly coloured and their disposal into the environment can be extremely deleterious. Their presence in watercourses is aesthetically unacceptable and may be visible at concentration as low as 1 ppm. They also affect photosynthetic activity in acquatic systems by reducing light penetration. The low bio-degradability of dyes adds to another problem. The treatment methods for these effluents are quite expensive and have operational problems as well. Already some dyes have been banned as they have been identified allergic and carcinogenic. As the environmental regulations are becoming more stringent, the need for alternate methods of dyeing textiles has spurred up.

Bio-mimetics or imitation of nature means copying or adaptation or derivation from biology. It is derived from bios, meaning life (Greek) and mimesis, meaning to imitate. The term was first introduced in 1960 by Steele as, the science of systems which has some function copied from nature, or which represents characteristics of natural systems or their analogues.

Nature has unique abilities to manipulate light. Most surfaces in nature often produce brilliant, vivid and iridescent colours. If we look very carefully, wed find that colours actually alter with the change of angle of sunlight and eyesight. In the nature, colours consist of pigment colours and structural colours. Colours generated by pigment are based on the selective absorption of light, while structural colours are generated by selective reflection arising from dispersion, scattering, interference and diffraction.

Nanophotonic or nano-optics is the study of the behaviour of light on the nanometer scale. It is considered as a branch of optical engineering which deals with optics, or the interaction of light with particles or substances, at deeply sub-wavelength length scales. Alternatively coloured, peacock feathers glitter like metallic lustre. Interestingly, their colors are of gradual change when we take a closer look at peacocks feather from one side to the other, we will find its color changing from blue-green to yellow-green. This is what makes coloration by physical structure more unique and in a way, charmingly magical than that by traditional chemical dyeing.

Inspired by the study of a peacock feathers structure, Beijing Institute of Clothing Technology, China has explored to use physical and optical technologies to generate special colors with nanophotonic crystals. The congregation status of two-dimensional photonic crystal structure of kertain in feather barbs generates a two-dimensional periodic structure, which has strong reflection to light in a certain wave band along the surface to form different array of colors.

Research on infrared spectrum discovered that the chemical components of peacock feathers in yellow and blue area have no significant difference. This proves that the colors of peacock feather are not generated based on theory of coloration through pigment but through its own structure.

Under the optical microscope with magnification of 100 times, it is clear that feathers show colors under illumination of white light. The colors vary from light yellow to deep green with change of observation angle. Adjusting the magnification factor to 500 times, we can see that small barbs give out metallic lustre with a clear scale layer on the surface, presenting a sectional structure.

Observing a feather crack on a small barb with scanning electron microscope at magnification of 1,500, 8,000, 15,000 and 25,000 times, we can see kertain layers arranged inside small barbs. This very thin protein fiber can reach 150-160 nanometers in its diameter. Their arrangement forms a two-dimensional photonic crystal fiber structure with equal thickness and clear structure and goes along the axial direction of small barbs. When illuminated by a beam of light, this microscopic physical structure at level of nanometer will form a good interference and superposition to photons, which is similar to white light going through a triangular prism to form seven-color light and then reflect a single color towards one direction to form a color. The colourful feathers of many birds are related to the nano micro-structure inside their feathers. Such structure shows arrangement of nanofiber substances has certain regularity and periodicity to perform extraordinary functions.

The nano structure in the small barbs of peacock feather is manually imitated, and this nano periodic structural coloration mechanism is applied in textile fiber industry to generate special colors. People will not rely on chemical dyestuffs; the colors will be bright and never disappear, with the environment being properly protected. Besides textiles, we can also develop nano printing machines based on this theory and print colourful pictures without pigment.

According to the optical interference coloration theory based on study on wing surface of butterfly Morpho butterfly. Japanese Teijin has developed structural coloured fibers Morphotex. These are laminated structure fibers made possible through nanotechnology and the thickness of the lamination is controlled in the order of nanometers for optically developing colors. This technology is based on the biomimetic 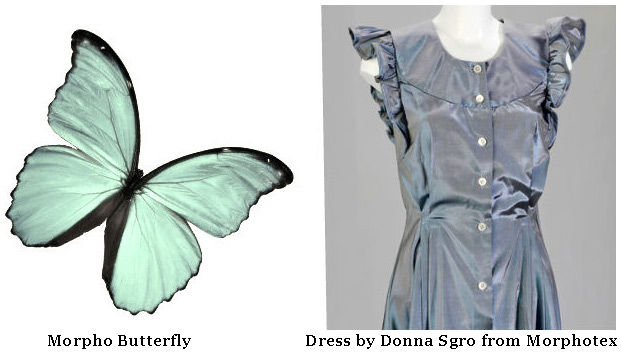 conception for the microscopic structure of Morpho butterflys wings. Thin films of 70 nm thickness consisting either of polyester or nylon are laminated in 61 layers alternatively, and colors are developed by precisely controlling the layer thickness according to visible wavelength.

If polymer composition is reasonably selected with sufficient number of layers, the color of these fibers can vary from light to deep, and in theory, any color can be obtained.

One major issue involved with production of such fibers is that of precision. When magnified (20,000 times) scales of the upper wing surface of Morpho are seen under SEM it is noticed that a regular grid of precisely constructed wedge-shaped ridges are spaced at an intervals of about 0.00022 mm. The pattern is repeated so accurately that the maximum deviation is only 0.00002 mm. No earthly workshop specializing in miniaturization [nanotechnology], would be able to make one single wing scale with this required precision.

Biomimetics is a process of emulating natures ways of finding a solution including designing and making with the least environmental impact. The biological systems should be seen more as concept generators in terms of transfer of principles and mechanisms rather than something to copy. With the advent of modern technologies, it is possible to design and manufacture products/systems that are based on nature. However, the process or the technology to do so has not always been purely eco-friendly. It is primarily because natures implementation of a concept into a system is far different than that developed by humans. If Biomimetics is to be used as a new principle in designing textiles, sustainability must be part of it. Biomimetics can help us rethink our approach to material development, processing and help reduce ecological degradation.

Nature provides us a plethora of techniques and there is a tremendous potential to learn from it. Understanding the structure-function relationships is the key in developing textile products that are, for example, adaptive, thermo-resistant, super hydrophobic, or self-healing, examples of which are plentiful in nature. Transfer of a concept from natural to man-made is not trivial and requires a lot of meticulousness. Textile fiber assemblies can readily provide an ideal test-bed for this concept not only for dyeing but for other applications as well.